For Robin's attack of the same name, see Thunder (Robin)

Thunder (かみなり, Kaminari?, lit. "Lightning") is Pikachu and Pichu's Down Special Move.When used, the Pokémon yells as a bolt of lightning drops from the sky, striking the user if its horizontal momentum has not carried it out of the way (and if there is no platform in the way). Upon hitting the user, a large shockwave is created with stronger knockback than the lightning itself. The user can act quicker if they are not stuck.

In Super Smash Bros., this move has infinite vertical range and thus can be used to score KO's when an opponent is near the upper Blast line. This is called thunderspiking, and can lead to much lower damage kills. Though the move is powerful, it has considerable ending lag, especially in Melee.

In Super Smash Bros. Melee, Pikachu/Pichu call out and a cloud appears high above them, a lightning bolt then strikes down from it, hitting either the first platform or Pikachu/Pichu themselves. If Pikachu/Pichu are hit an extra explosion of electrical energy is created that can do extra damage. Pichu incurs 3% damage if the bolt strikes it, making it the only special Pichu has that might not damage it.

It may seem that this move does not have a thundercloud, it does, but it is not very apparent unless on stages such as Hyrule Temple.

In Brawl and Melee, the thunder portion of the attack is considered a projectile and can be reflected back at Pikachu or absorbed for health. The explosion can not however. Also, in Brawl, Thunder can pass through platforms that are close enough to the cloud. This is best seen in Hyrule Temple if Pikachu uses Thunder on the bottom portion of the stage. The off screen cloud portion of the thunder attack can be used as a KO hit if the player being hit is high enough in the air. Pikachu is helpless while initiating Thunder.

An interesting property of this move is that if this attack connects with Pikachu in mid-air, Pikachu will bounce upwards a bit. Due to its startup time, it won't aid much in recovery, but is useful to Guard Break, especially against spikers. If used near the edge of a stage, the Thunder can create a wall of electricity to prevent a recovering opponent (especially if Thunder Jolts are sent out beforehand), best if they try to go for the ledge.

In Super Smash Bros. for Nintendo 3DS and Wii U, the thundercloud now has a Meteor Smash effect. 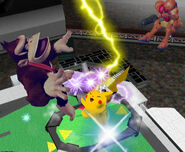 Thunder's Meteor Smash in SSBWU/3DS.
Add a photo to this gallery

Thunder Burst consists in Pikachu discharging energy from its own body, striking opponents around itself, after hitting consecutively, it can launch the opponents very far.

Distant Thunder is a higher range version of the original Thunder, however, it gives more damage when used in the start of the move. 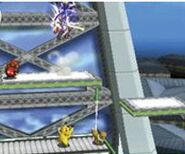 Pikachu using Distant Thunder.
Add a photo to this gallery

In the main series Pokémon games, Thunder is a very powerful Electric-Type attack with a base power of

110 but with a poor accuracy of 70%. However, Thunder will have 100% accuracy in the rain but 50% accuracy in harsh sunlight. Thunder also has an added chance of paralyzing the opponent 30% of the time. Unlike in Super Smash Bros., Thunder will not damage the user whereas Pichu could damage itself when using Thunder in Melee.

Retrieved from "https://supersmashbros.fandom.com/wiki/Thunder_(Pok%C3%A9mon)?oldid=572293"
Community content is available under CC-BY-SA unless otherwise noted.