This article is about Mewtwo's move. For Palutena's move, see Warp.

Teleport (テレポート, Terepōto?) is Mewtwo's Up Special Move. Mewtwo quickly vanishes and reappears in a different location, depending on how the user tilts the control stick.

If it teleports into the air, it will fall in a helpless animation. When used quick enough on the ground, it can be used in place of a Dodge, side step or rolling, as there is less lag time and it throws the opponent off. The only way to travel faster with Mewtwo is its Wavedash. This move, along with its other normal two jumps, allows Mewtwo to have a superbly long and safe recovery. Teleport also passes through attacks. However, this attack does not cause any damage to the opponent. Teleport can also be used to set off mines by traveling along the ground. 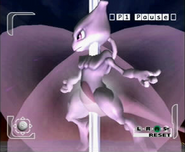 Mewtwo using Teleport in Wii U/3DS.
Add a photo to this gallery

In the first generation of Pokémon games, Mewtwo did not learn this move naturally, but could be taught it using a TM. With Generation II, Mewtwo (and a good deal of Pokémon) no longer could learn Teleport. Teleport is a Psychic-Type move that can be used to escape a battle with a wild Pokémon but will fail in a Trainer battle. Outside of battle, Teleport can be used to be transport the player to the last Pokémon Center that was visited.

Retrieved from "https://supersmashbros.fandom.com/wiki/Teleport?oldid=573249"
Community content is available under CC-BY-SA unless otherwise noted.