Target Smash!! (Break the Targets! in Super Smash Bros. and Target Test in Melee) is a mini-game appearing in three installments of the Super Smash Bros. series. The goal of the game is to smash 10 targets as quickly as possible.

The game records the lowest time taken to smash all ten targets. If a character has never smashed all the targets, the game will instead record how many targets were smashed at maximum. There is also a total time that is kept that includes the cumulative time taken to clear every character's stage. The total time only appears after all characters have cleared their stage.

In Brawl, one can also save replays of their attempts. Additionally, items have now been incorporated into the mini-game. Co-op mode is also available.

In Brawl, the player can use a code to play on the Target Smash Lvl. 1, as demonstrated here as well as play on the other levels. Target Test stages in Melee can be played on a similar method as well, including an unused stage as shown here.

In Brawl, instead of each character having their own Target Test, there are 5 Target Smash levels that are exactly the same for all characters, each with varying difficulty. The easier ones have larger targets while the harder ones have smaller targets. Also, the targets' color varies on the difficulty, matching the difficulty color. Levels 2, 3, 4 and 5 need to be unlocked by playing them or a higher level in Classic Mode. Example: playing Classic mode on hard difficulty will unlock level 2, 3, and 4 even though level 2 wasn't played.

This is a simple course, with very large targets, all near each other. It appears to be set in The Lake.

This is somewhat more complex. There are various high cliffs that have Targets at the top. There are also items scattered around the stage. It appears to be set in The Wilds.

This one is unique as it has a launcher, a spring, as well as a conveyor belt. It is set in a partial Box. It too has items. It appears to be set in The Swamp.

This level is icy, causing players to slip. There is one non-moving target that is very difficult to get, located at the bottom right of the stage, and for some characters, it has to be gotten last. This stage has no items. It appears to be set in The Glacial Peak.

This is the final target smash level. It has small targets, items, and moving platforms. It appears to be set in The Ruins.

Note: All of the challenges associated with Target Smash!! can be broken by a Golden Hammer. 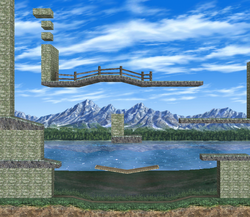 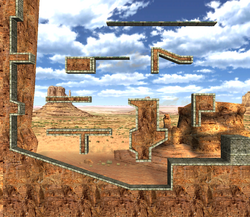 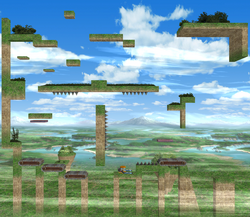 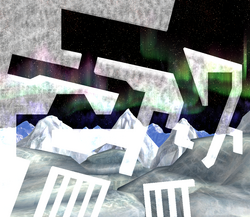 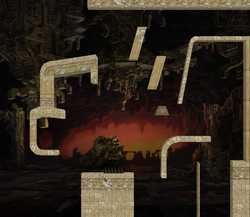 Riddling is a mini-game created by players, wherein the player attempts to break as many targets as possible before touching the ground. Exact rules vary, but the most commonly accepted rules are: 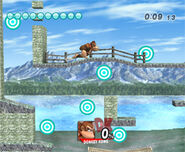 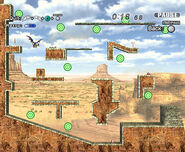