Unknown
Tapu Koko (カプ・コケコ Kapu-Kokeko) is one of the Pokémon that is set to appear from a Poké Ball in Super Smash Bros. Ultimate. It was revealed in the November 1st direct.

When summoned from a Poké Ball, it surrounds itself with a large net of electricity that lasts around 8 seconds. while that net is up, it will shoot out sparks of electricity in the cardinal and intermediate directions.

Tapu Koko is a Electric/Fairy-type Pokémon that was first introduced in generation VII. Tapu Koko is one of the Island guardians of the Alola region and protects Melemele Island. It is featured prominently in story of Pokémon Sun, Moon, Ultra Sun and Ultra Moon as it saves the protagonist and fights against the Ultra Beasts. 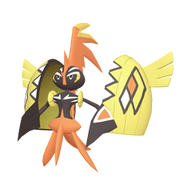