Back to page
View source

They're Figurines, Not Trophies

It needs mentioning on this page that the characters are figurines that are brought to life by Master Hand, unlike in Brawl, for example, in which the characters are trophies that are brought to life. I would add this in, but I don't know where it would go. Master Hand's page also needs changing along the same lines. PenguinofDeath 10:21, 30 May 2009 (UTC)

The aforementioned edits have been made. If anyone cares strongly/at all, feel free to change the relevant pages back. PenguinofDeath 17:05, 30 May 2009 (UTC)

Now, every character has his or her own SSB character page, whereas before they did not. However, many of these pages need work. Characters in need of a moveset: Luigi, DK, Link, Samus, Falcon, Ness, Yoshi, Kirby, and Pikachu

Characters missing a Combo/Stategy/Other Section: Luigi, Mario, DK, Link, Yoshi, and Kirby. Other issues or problems I found with each character.

Luigi-It is alright, but it should contain some strategies that Luigi players can use.

Mario-It gives some information, but nothing that a player couldn't discover in Training Mode by himself.

Link-To me it seems a bit short, more info should be added

Samus-Can be made more useful

CFalcon-To me that overview paragraph is too long and intimidating

Fox-Very good article (no bias coming from me making it >_>), maybe add attack descriptions and/or combos (depending on whether public opinion wants so) Pikachu-Moveset

Also, it would look better if all characters followed a single format. From what it seems, most of them are as follows: An intro paragraph/overview, a pros/cons list, a moveset, then Combos/Strats.

I think that Combo/Strats should be broken up. Then we can have an actual combo section, while strats can contain random useful info.ShoeThief 20:55, March 3, 2007 (GMT)

It's spelled with a C. 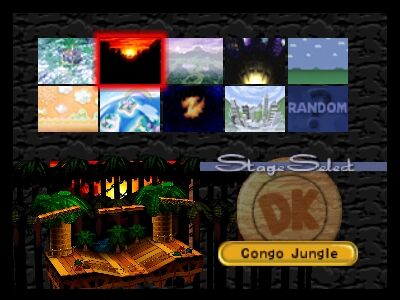 Went ahead and moved it. It made absolutely no sense for a section discussing changes made in a subsequent installment to be included in the predecessor's article. – EP (Talk • Edits) 19:36, November 23, 2007 (EST)

Can someone make a list of characters that were supposed to appear, but didn't do to spacial issues. The only ones I know of are Peach and Bowser.--Aipom--

I would put it on both places.

I edited it. The only ones that are true are Dedede, Bowser, and Mewtwo (true as in "the only ones that have a source backing them up"). No evidence for Peach, Pit, or the others mentioned there.Sir Ilpalazzo (talk) 17:19, 1 April 2009 (UTC)

Pit was mentioned by Sakurai but was ousted for Jiggly. Can't remember wher though.

Pit was never mentioned by Sakurai (for the first Smash). I'm absolutely 100% sure of this, and that the three mentioned above were the only ones who were supposed to be in at some point (along with Sukapon). People keep editing the article to add those others back in, but there's no proof.Sir Ilpalazzo (talk) 17:19, 1 April 2009 (UTC)

I'm sorry for this, but I don't know how to cite sources here. These are the links that prove (as in - direct statements from Nintendo's sites and Sakurai) that those three were planned at some points (Sukapon was considered for Melee, not Smash 64, so I was wrong there).

I was wrong to have Sukapon there (perhaps a Melee trivia section is in order, there's definitely enough for that) but the others are right, and in all my searches through official materials, I've never seen proof for the others.Sir Ilpalazzo (talk) 17:19, 1 April 2009 (UTC)

According to that page (translated), the characters (in order) that were desired but didn't appear were...

It wasn't Giygas, the votes were for "Mother 2 characters" or something like that. It didn't refer to any specific character (like the vote for Pokemon farther down the line). EDIT: It was really Mr. Saturn.

Also, it was specifically Ash / Satoshi and not the game Pokemon Trainer that was voted for. Weird but worth mentioning.

No, this was a poll for who people wanted in the NEXT Smash game. (Melee) Not for who was considered in the original Smash, because in the full list, it has characters like Sonic, Megaman, and Crash Bandicoot. This poll was made before Melee was announced as well. Meowth and Pit were on the poll too, but they weren't in the top 20. (GoldenYuiitusin (talk) 00:51, May 19, 2010 (UTC))

Hyrule and Peach's castle appeared redone in Melee though it dosent say, and the Saffron City model has changed to the...unlockable earthbound stage...in Melee.

I'd be hesitant to consider any of those stages the same. The two castle stages both force completely different game play styles and the Earthbound stage is only like Safron insofar as it is on the tops of buildings. As for any other elements, they are completely different. Clarinet Hawk (talk · contributions) 00:20, 28 September 2008 (UTC)

It looks like, for the characters that had 3D models made for them prior to SSB, the character models used in game are taken directly from the relevant game. In particular, I've noticed Fox and Link look very similar to their models in Star Fox 64 and Ocarina of Time, respectively. If this is the case, then I'm pretty sure it's the only SSB game to do so; aren't all the models in Melee and Brawl unique to that game? Might be worth mentioning under Trivia.

I don't see how the models can be "copied". For example, Link's (SSB) sword does not look like the Master Sword, and his hands have no fingers. Toomai Glittershine The Table Designer 18:12, 30 May 2009 (UTC)

Character articles for this game

I wasn't sure where else to put this, but, what exactly is the typical format for a character article of SSB? Looking around their articles, it's fairly random. --HavocReaper'48 19:30, April 25, 2010 (UTC)

Also, what of the images of the character's aerial attacks? The image is quite large. I'm working on Mario, but I noticed that picture on his article and others as well. --HavocReaper'48 19:50, April 25, 2010 (UTC)

To sign your posts on talk pages, please put ~~~~ at the end instead of manually typing your username. Dr. Pain 99

I just wanna say, for the record, that the first installment of the series is pure nostalgia for me, and no matter how much I liked Melee and Brawl, this is still #1 for me. At its time, the character models seem to appear pretty good despite people's words, the music just sounds fun and tense, almost all the characters, themselves, are balanced, which is something I hope Project Sora can fix for SSB4 since Brawl was a bit of a trainwreck when it came to balance issues and the tier lists... Man, this was just an awesome game! The opening cinematic was also pretty stellar to view, seeing the playable characters in figurine/doll-like appearances, which I personally prefer over trophies. Overall, I praised the development team since I had a huge blast with this as a kid... That, and Melee was pretty good, also.