Smashpedia
Register
Don't have an account?
Sign In
Advertisement
in: Sonic the Hedgehog universe, Background Characters, Mii Costumes,
and 13 more

Tails as he appears in Sonic Lost World

Miles Prower, nicknamed Tails, is the deuteroganist of Sega's Sonic the Hedgehog franchise.

Miles "Tails" Prower is a kind, gentle, and good-hearted twin-tailed fox who is loyal to all of his friends. He was first introduced as a rather timid and shy young boy, but as the series progressed, he grows into a more confident and outgoing person, mainly thanks to the help of his best friend Sonic the Hedgehog. Initially, he wanted to be just like Sonic and mimicked his heroic qualities, but eventually grew out of it to become his own character as he gained more self-esteem; however, he has shown to have a tendency to be big mouthed, which might often ruin the plans of his allies. Tails is supportive of his friends and is willing to help them, but is very humble and not one to take the spotlight from anyone. While still a hero, he is more interested in his inventions instead of gaining any recognition; despite this, he may feel personally insulted if someone does not recognize his mechanical prowess or it is not taken seriously.

Tails is the brains of Team Sonic due to being a skilled inventor, providing his friends the tools and weapons they need. His mechanical talents is said to rival Dr. Eggman's, with Tails' IQ being 300; as a testament to his skills, Tails can quickly understand and expertly use foreign technology after taking only a few looks at it. Miles can also build anything out of anything, claiming that he can construct a TV out of paperclips and reprogram a computer with nothing but a toothpick and dishwasher detergent. Some of the machines he has built over the years have included the Tornado series of airplanes, the Emerald Detector, the Sea Fox submarine, the Miles Electric, and even a fake Chaos Emerald. Outside of mechanical engineering, Miles is also proficient in several types of sciences, having been shown to have an understanding of quantum mechanics and theoretical physics as well as being able to read and translate Binary and Hexadecimal language. When it comes to battling, Tails is not known for hand-to-hand combat and instead fights with his gadgets (though he is capable of performing Spin Attacks much like the rest of the Sonic cast). One of his unique skills is his ability to fly by using his twin tails as a propeller, allowing him to airlift Sonic and company. Miles' tails have also shown some versatility, as he can also use it act as powerful whips and spin it so fast that it can tear through opponents.

Tails makes his first appearance in Sonic the Hedgehog 2 as Sonic's sidekick and can be controlled with the Player 2 controller. His flight ability wouldn't be shown off until Sonic the Hedgehog 3, where he could pick up Sonic and take him to other areas. Tails gets an expansive role in Sonic Adventure where he must race Sonic to each Chaos Emerald. In Sonic Adventure 2, his stages are instead third-person shooting levels with the help of his all-purpose Cyclone mech. In Sonic Heroes, he joins Sonic and Knuckles as a part of Team Sonic to help defeat Metal Sonic. Subsiquent titles have placed Tails as a supporting character, usually appearing to assist Sonic and friends (mainly providing a mode of transport) or as a playable character in the spin-off games; however, Miles did briefly get a starring role in three Japan-exclusive games titled Tails' Skypatrol, Tails Adventures (both on the Game Gear), and Tails and the Music Maker (for the Sega Pico).

While Tails does not appear in Melee, he and Sonic were the subject of a notorious April Fools' Day prank conducted by American gaming publication Electronic Gaming Monthly. In the prank, the magazine stated that both Sonic and Tails were secret characters in the game, and the only way to unlock them is to defeat 20 enemies in Cruel Melee; if done successfully, the player would have to defeat them in a 2-vs-1 in their unlock match. It also claimed that a "special surprise" would be unlocked if the player completed Classic Mode as either one.

The prank soon gained widespread attention amongst the gaming community, so much so that fellow gaming magazine Nintendo Power and even the Melee page on Nintendo's website had to clarify that the claims were false. EGM themselves later admitted that it was indeed an April Fools' Day joke in their next issue, where they also mocked those who fell for it. They would later hold a contest to see if anyone could actually KO 20 or more opponents in Cruel Melee and provide video evidence, where the winner would receive a free copy of Sonic Adventure 2: Battle.

Years later, Sonic franchise creator Yuji Naka would later reveal in an interview with EDGE magazine in 2004 that not only had he heard of the rumor, but talks were in place to actually have Sonic in Melee, but it could not happen due to time constraints.

Tails can be seen running on the shuttle loop in the background of Green Hill Zone, usually alongside Knuckles and Silver. However, he may sometimes appear by himself at random.

A friendly fox with two tails whose true name is Miles Prower. He can fly for a limited time by spinning his tails rapidly. Originally impressed by the sight of the speedy Sonic, Tails became his sidekick, rarely leaving his side. To assist Sonic in staying one up on Dr. Eggman, Tails utilizes his knowledge of electrical engineering to create mechanical devices.

Tails returns alongside Knuckles and Silver in the background of Green Hill Zone in the Nintendo 3DS version.

A costume for the Mii Gunner modeled after Tails was made available as a part of the Wave 6 batch of DLC costumes. It uses an original handgun, but is potentially inspired by his inventions such as the Blue Star II and the Wave Cyclone

This gentle-hearted little fox used to get bullied because of his two tails. Then one day he saw Sonic on West Side Island and decided to join him on his adventures. Now he's an expert mechanic and a partner Sonic can really rely on—he's come a long way since his timid, quiet beginnings! 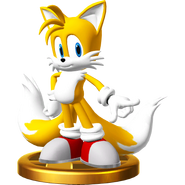 The Mii Gunner costume modeled after Tails returns, this time as a part of the Round 1 batch of DLC costumes.

A Spirit of Tails is available in the base game. It is a Support Spirit under the Ace class. Its Spirit Battle uses Fox in his yellow palette swap, and is equipped with a Rocket Belt and a Ray Gun, a reference to his flight ability and gadgets. Knuckles will also appear to assist Fox and the Gravity is reduced. The stage is Windy Hill Zone and the song that plays is "Emerald Hill Zone" (which is from Tails' debut game, Sonic the Hedgehog 2). It can also be summoned by using the Spirit Cores of Andy, Vulpix, and any Support Spirit.

As Green Hill Zone returns, Tails can be seen in the stage's background again alongside Silver and Knuckles.