A T-pose, sometimes known as a bind pose or reference pose, is the default unanimated state of a model in 3D graphics. This pose is often with all of a model's various parts straightened out or flattened for ease of animation. For most characters, this results in a pose where the legs are straight and the arms are pointing sideways in a T shape.

While a game is in development, character models are created and later textured; in this case, the bind

pose acts as the best way to allow the programmer and/or artist to apply textures, as it allows the model's viewer to see most parts of the model's body with no obstruction.

As one may expect, the Super Smash Bros. series is no exception to this "rule" of development, and it is possible to view these bind poses in-game through certain methods and circumstances.

While the vast majority of characters use standard T-poses, certain characters have variants due to

their body characteristics. Yoshi, for example, has his arms straight out in front of him instead of to the side (as does R.O.B.), while Ganondorf's armour in Melee forces him to take on an "A-pose" instead of a T-pose.

Bind poses are generally only intended for game development and, In theory, bind poses should never

be seen in the actual gameplay of a final product. In Super Smash Bros. Brawl, however, some attacks will cause bind poses to appear for a single frame, such as Olimar's Pikmin Chain and Ganondorf's Beast Ganon; seeing these bind poses, however, requires almost perfect timing with the pause button, as well as external help by slowing the game's pace down considerably.

Among the most common ways to see bind poses, however, is through the use of moveset swap hacks. While most animations will operate as usual, if the two involved characters' special moves have an unequal number of animations (or simply have animations of different names), trying to use an animation that does not exist ends up forcing the character into their bind pose as a failsafe. Other hacks can also result in bind poses for similar reasons; hacking Giga Bowser into brawls, for instance, will cause his losing pose to be the bind pose on the results screen, due to a lack of "applause" animations.

In Super Smash Bros. for Nintendo 3DS and Wii U, prior to version 1.1.0, bind poses possibly could be seen by pressing the Home button approximately 1 frame before the beginning of the victory pose in the results screen. This is because some files won't load when the game is paused this way, such as the sound files. Likewise, pressing the button earlier could result in crashing the game.

Squirtle in a T-pose 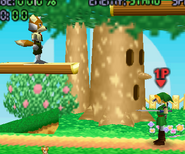 Two bind poses in Super Smash Bros.; note how Link is in the standard T-pose while Fox is not.

Mario, using Luigi's moveset through hacks, enters a bind pose due to a lack of suitable animations for Luigi Cyclone.

Mewtwo and Ganondorf's bind poses in Super Smash Bros. for Wii U, shown via a glitch. Note the aura around Mewtwo's body.