This article refers to the item from the Mario universe. For the enemy from the Earthbound universe, see Starman (EarthBound).

The Starman as it appears in Super Smash Bros. Brawl

The Starman (スーパースター, sūpā sutā?) is an item in all three games of the Super Smash Bros. series. As well as spawning normally, it can also be found in Capsules and Party Balls. It automatically bounces on the field and can fall off. A character who touches the Starman is granted invincibility for 10 seconds, though characters with a Starman can still be hit by Isaac's attack and the Team Healer. CPUs tend to try to evade characters under the effects of a Starman and in Melee, they won't even attack. In the same way that the Hammer comes with its own music, whenever a character is under the effect of a Starman, special music will play in the background and the stage music will stop. In Super Smash Bros. Brawl, the music sounds just like it did when the player got a Starman in Super Mario Bros.. Unlike most items, the Starman will jump around erratically, similar to its behaviour in the Mario games. Fighting Alloy Team members in Multi-Man Brawl are able to use the Starman, so one should be careful. 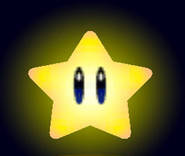 Starman in Super Smash Bros. Melee
Add a photo to this gallery
Retrieved from "https://supersmashbros.fandom.com/wiki/Super_Star?oldid=473799"
Community content is available under CC-BY-SA unless otherwise noted.