When Sonic's Final Smash is activated, the 7 Chaos Emeralds will orbit around him dealing considerable damage and knockback to any opponents who come into contact with them. Sonic will transform into Super Sonic saying "Now I'll show you!" ("Super Sonic style!" in Super Smash Bros. for Nintendo 3DS / Wii U), before the emeralds disappear back into Sonic. He gains the ability to fly around the stage at an incredible speed, thus it is the fastest power up usable by Sonic. The transformation lasts for about 15 seconds and while Sonic is transformed he is completely invincible. Sonic can attack in this form by simply ramming into opponents; the faster he's going, the more damage and knockback is dealt. It is similar in function to Pikachu's Final Smash, Volt Tackle, except that it cannot go through platforms like Volt Tackle, and has better knockback and control. Super Sonic can't KO himself when he reaches the edge of the screen, regardless of how far it is going, but if he turns back to normal while he's too far away to recover, he'll be penalized with a self-destruct. He is also unaffected by bumpers.

If it is used when a section of the Bridge of Eldin is materializing, the move will end instantly. This is also useful when Sonic is falling down from the platform, which prevents him from being KO'd as it can break his fall. The move cannot go through fall-through platforms. When it hits, it does about 35 damage, but the first attack is roughly 25 damage, and never lower. Experienced players who have learned how to control Super Sonic's slippery movement can use and abuse his relatively high damage output and insane speed to score multiple KOs.

Unfortunately, good things don’t last forever. In Super Smash Bros. Ultimate, transformation-type Final Smashes were completely done away with. As a result, Super Sonic needed a reworking, and resulted in Super Sonic simply flying across the screen in a straight line, with the player being able to adjust movement vertically. In theory, an excellent trapping tool, but the line is so thin that anyone caught by it can simply air-dodge through it. The vertical movement is surprisingly slow, so if Super Sonic is at the top of the screen and the target falls through, it will take a few seconds to get back down. Another method of escaping this is simply recover. Super Sonic has a set height limit, and cannot go offscreen by the vertical blast zone. As a result, recovering buys enough time to avoid taking major damage, and escape with two or three blows. In addition, the move is ridiculously short, lasting barely five seconds. If the target is at a medium percentage, the knockback into the vertical offscreen (but not blast zone) prevents them from falling down to deal significant damage, assuming they fail to air-dodge through Super Sonic.

Super Sonic in Ultimate is now widely considered to be among the worst Final Smashes in the game, next to Jigglypuff’s Puff Up.

Sonic's Final Smash. The Chaos Emeralds give energy to all living things, and Sonic's gathered all seven of them, then used their power to transform into Super Sonic. His abilities in this form far surpass his normal ones, and he is even able to fly. He uses a lot of energy in this form, so he can only remain in it for a short time,

The Chaos Emeralds are said to hold enough power to control the whole world. It's that power that turns Sonic into Super Sonic. He turns a glorious golden color and can fly at nearly the speed of light. In his Final Smash, this high-speed flight damages anyone who gets in its way and can even launch them!

In the games, Sonic had to collect all 7 (six in the first game, therefore he could not transform) Chaos Emeralds in order for him to turn into Super Sonic. In the older games, the Chaos Emeralds were hidden in Special Stages and were treated as the easter egg/unlockable feature in the games (starting with Sonic and Knuckles, other characters were capable of attaining Super forms such as Knuckles). Whilst in Super form, Sonic will act under the influence of the Invincibility and Speed-Up items, drastically increasing his speed and can destroy enemies merely by touch. However, because of his immense speed, the player could easily fall victim to pitfalls, the one thing he is still weak against. In addition, the Super form does not last for long as it consumes the player's Rings constantly, and thus must continue to grab Rings to maintain the state.

Beginning with Sonic Adventure (excluding Sonic Shuffle), Super Sonic is only available for play in the final boss battles which required him to defeat a similarly-powered up major antagonist. In Sonic Generations, however, Sonic must collect the Chaos Emerald to get to the final boss. In games such as Sonic Adventure 2, Sonic is partnered up with other characters who have obtained a similar Super form.

From Sonic the Hedgehog 4 and Sonic Colors onward, however, Super Sonic was made obtainable and usable in all stages once more after unlocking the form in some fashion. Sonic Mania, being a loving tribute to the older Mega Drive games, reintroduced super forms for Tails and Knuckles, and with the Plus expansion, added super forms for Mighty the Armadillo and Ray the Flying Squirrel as well. Each super form in that game has their own unique ability. Sonic Forces controversially lacked Super Sonic at first, with Sega intending to sell the form as DLC, although widespread mockery resulted in Sega making it free to download indefinitely.

Super Sonic as a whole was directly inspired by the Super Saiyan forms from the Dragon Ball manga franchise. 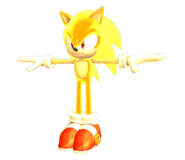 Super Sonic in action.
Add a photo to this gallery

Retrieved from "https://supersmashbros.fandom.com/wiki/Super_Sonic?oldid=574951"
Community content is available under CC-BY-SA unless otherwise noted.