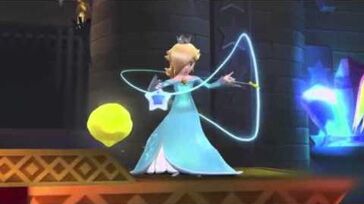 It should be noted, however, that four unlockable characters (Ness, Jigglypuff, Ganondorf, and Bowser Jr.) in the Nintendo 3DS version are starter characters in the Wii U version. This was a personal choice of Masahiro Sakurai, who opted with his team to make said characters starters as they were unlockable in the Nintendo 3DS to save players who already had this version to take extra time to unlock all the fighters, but still have fun unlocking hidden content.

Bold denotes unlockable characters in both versions. Bolded italics denote characters that are unlockable in the 3DS version, but default in the Wii U version.

amiibo is part of a new system introduced in Super Smash Bros. for Nintendo 3DS and Wii U, that uses near field communication (NFC) through special figurines of the respective characters, that can be bought separately. Through this, players bring the characters to the game as FPs (Figure Players), which can level up and be customized, learning more as they improve and interact with the Human Player, Computer Player, and other Figure Players. amiibo level up and learn faster by:

The two games feature considerably different stage selections, which is one of the primary differences between the two games. The two versions share 12 stages. The Nintendo 3DS version features more stages based on handheld console games, while the Wii U version features more stages based on home console games. Several stages in both games, however, ignore this distinction.

In addition to new stages, several Past Stages, known now as "Familiar Stages", reappear in both versions of the game. Three Familiar Stages are shared between the two games, and all are DLC.

Also, all stages can also be played as Omega Stages, which changes them into flat platforms similar to Final Destination.

Much like previous installations, Super Smash Bros. for Nintendo 3DS and Wii U have different modes. However, some are exclusive to each version of the game. Unlike the previous game is there also no official story mode.

Also known as "VS Mode", it is the traditional 4-player battle that can be done with either Human players, CPUs, and Figure Players. Additionally, the Wii U version has the exclusive 8-Player Smash, which allows, as the name suggests, up to 8 players to play simultaneously, however the range of maps is smaller, meaning not all stages can be played with 8 players.

In the new, modified version of Classic Mode, players choose different paths as they progress through a "World Map" to fight against waiting CPU opponents.

Other than battling the usual fighters in one-on-one fights, there is also the possibility of fighting giant or metal fighters, team battles with CPU players both aiding and against the player, and matches where the player must defeat opponents one after another or in groups.

Players are able to alter their "Fighter Balance": a system where gold is spent to adjust the intensity level. The higher the intensity, the smarter opponents will be, and the greater a player's rewards will be when victorious. Among those rewards are gold, trophies, and items for character customization.

Before the player starts a level, a roller appears and determines the player's rewards. Rewards in red are for customization, green ones are trophies, and yellow means gold.

In the Wii U version, the trophy of the player's character is put in an arena along with other characters' trophies. The player can move their trophy around the arena, and if it touches a group of trophies, it will be tossed into a battle with those characters (a faint image of the stage will be under the base of the trophies). After the fight, all the defeated characters' trophies will be launched out of the arena, and the remaining trophies will organize in new groups.

Along with normal and 8-player matches, intruders may appear randomly before matches, being either metal or giants characters. In team battles, instead of a random CPU companion, a partner is chosen from the fighters defeated in previous battles. There is also a rival that can be challenged anytime; the longer they aren't battled, the more powerful they will be, but it will also give more rewards when defeated.

The Fighter Balance and Reward Roller are kept from the Nintendo 3DS version.

A mode comprised of the Multi-Man Smash, the new Target Blast, and the Home-run Contest.

The score for these games affects the player's Global Smash Power, by either increasing or decreasing it, making each time count.

In Multi-Man Smash the player fights against all three types of Miis, with randomly generated appearances. Like in Super Smash Bros. Brawl, it offers a two-player mode.

Target Blast is played similarly to Home-Run Contest. However, players will be presented with a giant bomb instead of the Sandbag, and must inflict it enough damage to create the biggest explosion possible by racking up points from obstacles and targets waiting to be destroyed. Much like in Home-Run Contest, there is a 10-second timer, and after it expires the bomb will explode. Getting a good score depends on launching the bomb to areas rich with targets, getting the timing of the explosion just right, and using the explosive blocks found around the stage to maximum effect. It also allows two players together, however in form of a versus battle: each player gets their turn to launch the bomb, rather than both players racking up damage against the bomb simultaneously. The player with the most points wins.

Home-Run Contest now features a strong barrier in the arena, allowing players to rack up damage for a longer time. Like in Super Smash Bros. Brawl, it allows two-player mode.

For Fun and For Glory

Online gameplay has been completely reworked, where players can choose between two new modes:

A mode exclusive to the Nintendo 3DS, where up to four players (3 other CPU players or 3 other Human players) can compete in two separate instances: one where they collect power-ups in a large maze-like stage, and another one where they fight each other in a normal stage, using the power-ups each character has picked up to their advantage.

An exclusive game mode for the Wii U, where up to four players can play a board game. Players can collect characters and power-ups for a final fight, but it is possible to lose them through traps and secondary fights. There are three board sizes, and also different options for how many turns you take.

Another exclusive mode to the Wii U, it consists of a series of random challenges that give various rewards when completed; either custom parts, trophies, or gold. The mode is presented by Master Hand and Crazy Hand, each with its unique way to play. To play Crazy Orders you either need to earn a ticket or pay a fee.

Every time you enter this mode, 3 random-created challenges of varying difficulty and entry fee (Gold) to play will be presented to the player; every challenge with different battle rules, special powers for fighters and even physics laws like altered gravity. Each challenge can only be tried once, winning allows you to get the secret reward, if you fail you get nothing. After playing a challenge, a new set of 3 will appear.

It costs 5000 gold or a free pass to play this mode (free passes are gained by playing various modes, such as Classic and Smash Tour). In Crazy Orders, you have a 10-minute time to complete various challenges, similar to the ones in Master Orders, and 3 are presented in each "round", with your damage percent carried over in each round. You can stop at any time during this, bringing you against a Stamina fight with Crazy Hand. The more rounds you play, the more powerful Crazy Hand will be at the end and it can even be accompanied by CPU characters. You will only get your rewards after beating Crazy Hand, if at any time you lose a challenge or run out of time, Crazy Orders will end and you'll only receive a small portion of your reward stash.

The following techniques were avaliable at the launch of the Nintendo 3DS version, but were fixed in patch Version 1.0.4, and the release of the Wii U version removed them entirely.

Patch Update is a feature added to both versions of the game, in order to fix in-game bugs and provide character balance.

During the Nintendo Direct held at April 1st, a new feature called Smash Bros. Fighter Ballot, was introduced to the official Smash Bros. site. It allowed fans to request character for Super Smash Bros. for Nintendo 3DS/Wii U through a small form. The deadline for requesting a character was October 3rd, 2015. The winner of the ballot was Bayonetta, who was voted #1 in Europe and in the top 5 in America.

The game was first announced at E3 2011, but no further information was released due to Masahiro Sakurai working on finishing Kid Icarus: Uprising. At the start of 2012, the game was officially in production, but new information was not released until the following year.