Start a Wiki
watch 00:58
'Super Smash Bros. Ultimate' - Trailer
Do you like this video?

Every fighter from the previous four games returned for this installment. In turn, the development team stated that there would not be many newcomers. There are eleven newcomers, with five of them being Echo Fighters.

The starting roster consists of the original 8 characters from Super Smash Bros. with the rest of the characters being unlockable.[3]

All stages have a Battlefield form and Omega form. There are 103 stages and all stages are available from the start, with 5 more stages released as DLC to coincide with the newcomers in the Fighters Pass. Making the amount of stages being 108 in total. 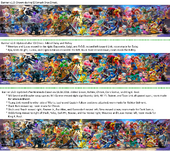 Retrieved from "https://supersmashbros.fandom.com/wiki/Super_Smash_Bros._Ultimate?oldid=588059"
Community content is available under CC-BY-SA unless otherwise noted.