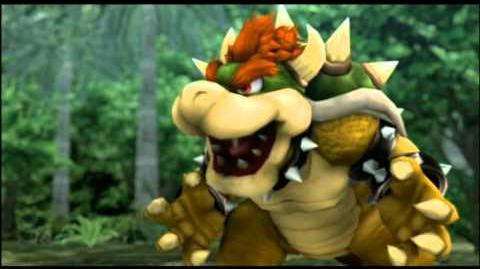 The cast of characters includes various returning characters from Melee as well as a variety of newcomers to the game. Unfortunately, Roy, Dr. Mario, Young Link, Pichu, and Mewtwo were cut. Some returning characters have been updated or refined since their last appearance - in terms of appearance, fighting capabilities, or both. For example, Link and Fox McCloud have taken on new designs from more recent titles, while Samus Aran has gained the ability to change into Zero Suit Samus by using her Final Smash.

Other newcomers are the first to represent their series: characters like Pit, representing the Kid Icarus series, which has not been seen in a video game since the 1991 Game Boy game Kid Icarus: Of Myths and Monsters, Wario, an occasional antagonist of Mario's from Nintendo's highly successful WarioWare and Wario Land series, and Captain Olimar from the Pikmin series. Solid Snake, the main protagonist of the Metal Gear franchise, and Sonic the Hedgehog from his eponymous series become the first third-party characters to appear in a Super Smash Bros. game.

There are 41 stages in the game, 31 stages which are new to the game and 10 stages returning from Super Smash Bros. Melee.

On October 11, 2007, George Harrison of Nintendo of America announced that Brawl would be released on February 10, 2008 in North America, but was later delayed to March 9, 2008.

Sakurai stated in multiple interviews that some characters who made their debut as fighters in Brawl were initially considered to be included in Super Smash Bros. Melee. For example, Hideo Kojima suggested the idea of including Solid Snake in Melee to Sakurai, which did not happen because development was too far in for Melee at the time. This would lead to Snake ultimately being included in Brawl instead. Additionally, Lucas was supposed to be used in Melee, but was excluded due to the constant delay and ultimate cancellation of Mother 3 on the Nintendo 64.

All the trailers can be found in the game as data for the player to watch.

Note: Mr. Game & Watch, Olimar, R.O.B and Samus have no voices, therefore, no voice actors. It was rumored that voice actor Jim Cummings voiced Bowser in this game, but this rumor was later proved false. DK and Diddy Kong haves realistic animal-like sounds in this game, Instead to their cartoonish voices, Takashi Nagasako and Katsumi Suzuki. DK was gave realistic gorilla roars and Diddy Kong is screeching like a real monkey.

Super Smash Brothers Brawl - All in one Commercial