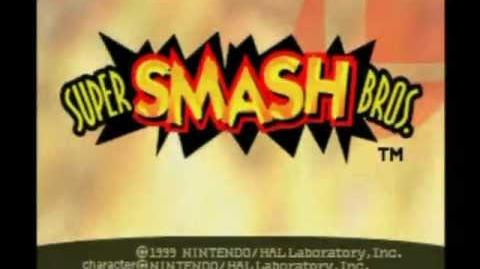 The Super Smash Bros. series is a dramatic departure from other fighting games, such as Street Fighter. Instead of winning by depleting an opponent's life bar, Smash Bros. players seek to knock opposing characters off the stage, KOing them. Characters do not have "health bars" in Super Smash Bros.; they can take an unlimited amount of damage, however, each hit adds to the character's damage percentage. This percentage starts at 0%, but can exceed 100% and caps at 999%, and the higher the damage percentage, the farther an attack will launch an opponent, and the easier it will be to knock them off the stage. Being knocked too far above, beside, or even under the stage will KO a character. If knocked off, a character may attempt to get back onto the stage by jumping or using various "recovery" moves before they reach the stage's boundaries. Some characters have different recovery moves, while others have better jumps. Some characters are heavier, making them harder to knock off the stage, and making it harder for them to get back onto the stage, while others are lighter, making it easier for them to get knocked away, as well as easier for them to get back.

Each character possesses distinctive and unique moves, and various items which can appear during fights. These items can be melee or long-ranged weapons, throw-able items, power-ups, items that lower a character's damage percentage, and more. Items appear randomly out of thin air, but the player can adjust how often the items will appear, if at all. Some items are references to past Nintendo games, like the Star Rod or the Bob-Omb, while others were specifically made for Super Smash Bros. Poke Balls are an item, and when thrown, a random Pokemon will appear and attempt to attack all of the players except for the one who threw the Poke Ball.

Most stages have a theme relating to a Nintendo franchise or a specific Nintendo game, and are interactive to the player. Although the stages are rendered in three dimensions, characters in Super Smash Bros. can only move on a two-dimensional plane. Some stages also feature random hazards that can help or harm players.

Super Smash Bros.'s play controls are greatly simplified in comparison to other fighting games. While traditional fighting games require the player to memorize button-input combinations (sometimes lengthy and complicated, and often specific to a character), Super Smash Bros. features an easy-to-learn control scheme: A for standard attacks and B for special attacks, and the control stick to move. Characters are not limited to constantly facing their opponent, but may run around freely. Smash Bros. also implements blocking and dodging mechanics, as well as jumps and double jumps. Grabbing and throwing other characters is also possible. Combining these many ways to play allows different players to make the game as simple or complex as they like.

Although the player can choose from five difficulty levels, the game's single-player mode always follows the same series of opponents. This game mode is called Classic Mode in sequels. The player will choose one unlocked character, and battle against a series of characters in a specific order, attempting to defeat them with only a limited amount of lives. If the player loses all of their lives (or runs out of time, regardless how many lives left), they have the option to continue at the cost of a considerable sum of their overall points. Selecting yes cuts their score in half and restarts the battle. Selecting no or not selecting within a ten second countdown will result in a Game Over.

The "Break the Targets" minigame as well as the "Board the Platforms" minigame are two of the remaining single-player games. The objective of the minigames is to break each target or board each platform, respectively. The goal must be achieved without falling off each character-specific stage. The last one is the "Training Mode" section, where the player can choose any of the available characters and the opponent, as well as any stage. When started, a menu can be brought up to gain almost any control, such as slowed game speed, spawning any item, and telling the opponent what to do.

Up to four people can play in multiplayer mode, which has specific rules predetermined by the players. Stock and timed matches are two of the multiplayer modes of play. This gives each player a certain amount of lives or a selected time limit, before beginning the match. A winner is declared once time runs out, or all but one player are KO'ed.

There are twelve playable characters in Super Smash Bros., eight are available from the start, while four are unlockable.

There are a total of nine stages, eight starter stages and one unlockable stage.

Shown in bold, Mushroom Kingdom is the only unlockable stage in Super Smash Bros.

Although Super Smash Bros. does not feature online play, emulators have the ability to do so. Project64k and Mupen64k are the most used emulators of playing online.

The logo for Super Smash Bros..