The Super Jump Punch is Mario, Luigi, and Dr. Mario's Up Special Move. The move involves the user performing a jumping uppercut, with the effect depending on each user.

Mario's Super Jump Punch propels him at a forward diagonal angle. Upon hitting an opponent, a coin will fly out and the opponent will be inflicted 1% for each hit, with the attack dealing 10-13% damage. Super Jump Punch can also be aimed straight up by holding the control stick/directional pad in the opposite direction Mario is facing, or more horizontally by holding the control stick/directional pad forward.

In Super Smash Bros. Melee, Super Jump Punch can be cancelled at its apex with a wall jump, greatly improving Mario's recovery. On the downside, it gains less distance and is weaker overall, lessening its recovery and offensive potential.

In Super Smash Bros. Brawl, the hits connect more reliably, and the final hit deals more knockback, making useful for KO's over the upper blast lines. However, it can no longer be cancelled into a wall jump, and Mario, upon landing, will fall on his back before getting up, increasing the landing lag of the attack.

In Super Smash Bros. for Nintendo 3DS and Wii U, Super Jump Punch gains more vertical distance than its predecessor, greatly increasing its recovery. However, the move retains its high landing lag from the previous game.

Mario performing his Super Jump Punch as an attack in Super Smash Bros. 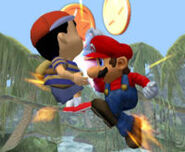 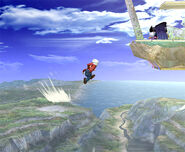 In Super Smash Bros. for Nintendo 3DS/Wii U, Dr. Mario's Super Jump Punch acts like a sex kick. Dr. Mario performs a single strong punch that deals 13.44% damage if he's close enough to an opponent, and a sourspot at the peak of the jump that deals 6.72%. This version of Super Jump Punch can be seen as a slight extreme version of Fire Jump Punch, as it has more KO potential, and can be moved in the opposite direction upon connecting with the clean hitbox. However, it has a shorter duration and more landing lag due to using the same landing animation for Mario's Super Jump Punch in Brawl.

Luigi's Super Jump Punch propels him diagonally forward like Mario in the original Super Smash Bros., and goes directly upward from Melee onward. The move deals damage based on Luigi's proximity from the opponent. If used far from the opponent, he will inflict 1% (a single coin flies out), with slight flinching and no knockback. However, if used up close at the beginning of the move, it transforms into the powerful Fire Jump Punch (indicated by the ping sound), dealing 25% damage with high knockback; however, an aerial Fire Jump Punch deals 20% damage (Melee onward).

In Super Smash Bros. Melee, due to the move propelling Luigi directly upward, Super Jump Punch was drastically weakened as an offensive and recovery move. The move no longer gains any horizontal distance, and grants less vertical distance. In addition, an aerial Fire Jump Punch deals 20% damage, making it a less effective finisher in the air.

In Super Smash Bros. Brawl, using Super Jump Punch grants Luigi more horizontal movement, which greatly aids in his recovery. In addition, Fire Jump Punch, while having a smaller sweetspot, deals more knockback, and can KO reliably at 50%. However, because Luigi, upon landing, buries his head into the ground before taking it out, Super Jump Punch has much more landing lag.

In Super Smash Bros. for Nintendo 3DS/Wii U, Super Jump Punch deals much more knockback, and Fire Jump Punch now goes a smaller distance vertically, making Luigi less likely to be punished. However, an aerial Super Jump Punch has less recovery potential due to gaining less horizontal distance and much less vertical distance, as it can no longer reach Battlefield's highest platform, and still retains its high landing lag.

Super Jump Punch's recovery potential varies by game, with it being more reliable at vertical recoveries due to going straight up. However, if combined with Green Missile and Luigi Cyclone, Luigi is given a very flexible recovery. Fire Jump Punch serves as one of Luigi's finishers, though it is a strictly vertical KO option. Luigi can easily combo any of his attacks into Fire Jump Punch due to his fast attack speed and damage output. Fire Jump Punch is extremely powerful in Brawl when used in conjunction with Negative Zone, as the stunned opponents provide the opening Luigi needs to get in close before using it.

The Fire Jump Punch, as seen in Super Smash Bros. 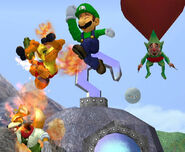 Explosive Punch is one of Mario's Up Special Moves that can be used via customizations. Mario does a strong explosive punch, but does not jump as high.

Mario's Explosive Punch deals more damage than the default. It is slightly slower, so it may not be as reliable as a combo finisher, though if it does connect it can be a powerful K.O move. Unfortunately it cannot go as high into the air, so Mario may not be able to recover with it.

Super Jump is one of Mario's and Dr. Mario's Up Special Moves that can be used via customizations. Mario/Dr. Mario jumps higher, but the move doesn't deal any damage. Mario covers much greater lengths, but Dr. Mario's Super Jump only travels as high as Mario's default Super Jump Punch.

Both Mario and Dr. Mario have the Super Jump custom move. It goes much higher than their average Super Jump Punch, but unlike the default it will cannot deal any damage, and so it cannot be used as a combo finisher or to secure K.Os off of the ceiling. Considering Dr. Mario's poor recovery with his default move, the Super Jump is more beneficial to him than it would to Mario, though it is a reliable recovery option for both of them either way.

Ol' One-Two is one of Dr. Mario's Up Special Moves than can be used via customization. It does not travel as high, but instead performs a fiery jump punch attack that deals two hits and decent knockback.

Fiery Jump Punch is one of Luigi's Up Special Moves that can be used via customization. It is now easier to sweetspot the fiery punch, and has more horizontal movement, but Luigi gains less vertical distance, and the attack is weaker overall.

The Fiery Jump Punch is simply put, a crutch. While it is easier to land the clean hit, it is noticeably weaker and sacrifices too much vertical height. The ease of contact is counterbalanced by the weakness of the Fire Punch. Overall, you're better off learning the timing for the default than getting used to the Fiery Jump Punch's range.

Burial Header is Luigi's other customization. Luigi cannot fire punch opponents on the way up, but can bury them on the way down.

The Burial Header is a high-risk-high-reward move. Although it deals less damage and has no critical hit or KO power, it is great for edge-guarding opponents because the hit on the way down can launch opponents away again. It has some combo and KO set-ups as well, burying opponents and keeping them still for a powerful KO move at higher percentages and some combo starters at middle percentages, if Luigi is fast enough. Recovery wise, it has the best vertical distance of his up specials (able to reach the top platform in Battlefield) but has less horizontal movement, and Luigi falls down very fast.

technique used by the Mario Bros. - the jump. In the original Super Mario Bros., Mario and Luigi used their jump to cross gaps (called "abysses"), stomp on enemies (namely Koopa Troopas and Goombas), and break bricks or hit blocks to reveal coins or power-ups (namely Super Mushrooms and Fire Flowers). The Super Jump Punch is based on Mario and Luigi's ability to reveal multiple coins from blocks with a jump; this is seen when Mario, Dr. Mario, or Luigi use the attack on a foe. During the jump animation in these games, Mario and Luigi would raise a fist in the air, which is where the punch comes from.