Yoshi flies around, 8% for ram, 17% per fireball, up to 66% for fire breath
Super Dragon is Yoshi's Final Smash in Super Smash Bros. Brawl and Super Smash Bros. for Nintendo 3DS and Wii U. He grows wings and is able to fly freely, and can do about 8% damage by touching his opponent. If no buttons are pushed for about three seconds, Yoshi will start to breathe a continuous stream of fire which causes very heavy damage (up to 66%). In addition, he can shoot fireballs, that does about 17% damage each, by pressing either the neutral attack button or the special attack button. The Final Smash lasts about 20 seconds.

Although it isn't renowned for being one of the deadliest Final Smashes, it can be devastating if used properly. 66% in one fire breath can usually lead to a KO with a fireball if all the flames hit, although with the opponent desperately trying to avoid the flames and due to Yoshi's slightly bumpy movement, this can sometimes be difficult. Another tactic is due to the speed of the fireballs, Yoshi can juggle his opponents until they fly past the Blast line for a KO. 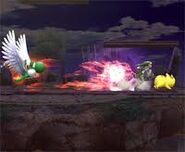 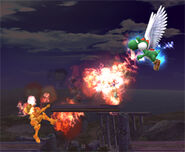 If left for a certain amount of time, Yoshi will spit fire breath on his own.