Super Dedede Jump is King Dedede's Up Special Move. He jumps extremely high, then crashes down.

If a foe is struck by Dedede's underside on the way down, they are spiked. If caught under Dedede's weight upon impact, they are shot at a 45-degree angle sideways. Foes can also be hit by two stars that appear at Dedede's sides upon impact with the ground. The jump can be angled by pressing left or right while Dedede is turning to face the screen before he actually jumps, but once in the air, there is no control over it. He is vulnerable when he lands, so one can cancel the move by pressing down in Brawl or up in 3DS/Wii U if it looks risky. However, if it is done too close to the ground, when Dedede lands, he will become even more vulnerable: instead of just getting up, he will fumble around before getting up, forcing strategy when using the move. If Dedede hits a ceiling while using the move, or cancels it in midair, he will fall Helplessly.

Unlike most other Up Special Moves in the game, this move does not auto-sweetspot the edge. However, if the move is canceled close enough to the edge, Dedede will snap to it. It is also possible to use the Super Dedede Jump as an edgeguarding move. 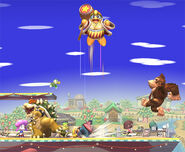 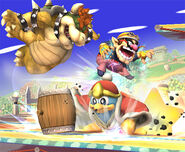 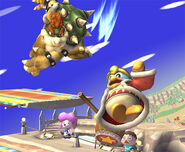 If things look bad, it can be cancelled.
Add a photo to this gallery

Rising Dedede is one of King Dedede's Up Special Moves that can be used via customization. big jump that attacks on the way up instead of on the way down.

The Rising Dedede custom variation attacks as King Dedede ascends rather than as he descends. Upon reaching the peak of his ascension, King Dedede goes into helpless state, making the move unsafe for use recovering above the edge. Rising Dedede is a KO move, KO'ing around 120% on most characters. As the move does not have a descending attack, it does not meteor smash or bury, nor does it send out star projectiles upon King Dedede landing on the ground. Since the hitbox is out when King Dedede is moving upwards it makes it more difficult for opponents to gimp.

Quick Dedede Jump is one of King Dedede's Up Special Moves that can be used via customization. A jump and crash that's extra fast but doesn't go as high or hit as hard.

The Quick Dedede Jump, as the name implies, is a faster version of the Super Dedede Jump. Faster recoveries are more difficult to gimp or meteor, but this custom variation suffers a decrease in vertical height as well as horizontal influence as a result of its speed. The move can result in an SD if used superfluously or carelessly. The move deals less damage but the descending attack's meteor smash is stronger now, being even deadlier than before.

Quick Dedede Jump
Add a photo to this gallery

The Super Dedede Jump is one of King Dedede's main attacks from the Kirby series, including his debut in Kirby's Dream Land. In the Kirby games, when Dedede lands, two stars would appears on each side of him which Kirby could swallow and spit them back at King Dedede, though Kirby can't swallow the stars in Brawl. Being able to cancel the attack and land normally is a new addition added in Super Smash Bros. Brawl, and makes it reminiscent of the "High Jump" ability from Kirby's Adventure and its remake, Nightmare in Dream Land that shares the same properties.

Amusingly enough, if this move is used under a Low-Gravity effect, Dedede comes down at a ridiculously slow speed, and can travel absurd distances horizontally. By the same token, its utility as a recovery move is hampered by high-gravity effects, but it becomes much more difficult to avoid.

Retrieved from "https://supersmashbros.fandom.com/wiki/Super_Dedede_Jump?oldid=576636"
Community content is available under CC-BY-SA unless otherwise noted.