Suicune (スイクン, Suikun in Japanese language versions) is a fictional creature in the Pokémon media franchise.

Suicune is treated as a "legendary" Poké Ball Pokémon; its chance of appearing is much rarer than most of the others, and in return, its effect is more powerful. Suicune uses Icy Wind as its attack. A cloud of icy wind surrounds Suicune. Any character that makes contact with the cloud of wind will take damage. A heavily damaged character may also freeze if contact is made. Suicune's attacks do not harm the summoner.

Suicune features as a collectible trophy, unlocked as one of the 100+ trophies that can be collected randomly during normal play, such as in the Trophy Lottery and throughout the various Single-player Regular Matches. It reads as follows:

Suicune
This mystical aurora Pokémon constantly journeys in search of places with pure flowing water. Suicune wields the power to purify instantly any contaminated water it finds. Some say Suicune is the north wind reborn. Its strange and dramatic story is told over the course of the Crystal version of the Pokémon game. (Pokémon Gold & Silver 10/00)

Suicune returns to the Smash Bros. series. Unlike most returning Pokémon, Suicune has been given a new attack, which acts as a powerful beam of ice that strikes any enemy in front of it. The attack has been confirmed in DOJO!! to be Aurora Beam. Suicune makes the same windup animation it had from Melee, so players should remember that its attack is different, and avoid being hit by the Aurora Beam when they were expecting Icy Wind. When a player is hit, they stay hit for the rest of the attack's duration. And since the Aurora beam pushes the player off the screen and ends with an extreme amount of knock-back, this attack is also a One-hit KO. Enemies also receive minor damage and be momentarily frozen from touching Suicune.

The damage made by Suicune to the opponents is 35%.

An Aurora Pokémon. It has the power to instantly purify even the filthiest water. Suicune is said to be the reincarnation of the northern wind, so when it shows up, so does that wind. Suicune uses the move Aurora Beam--aurora light focused into a powerful beam. Along with inflicting damage, this attack also lowers the target's attack power.

Suicune returns in Super Smash Bros for Nintendo 3ds & Wii U once again using Aurora Beam from Super Smash Bros Brawl this time the beam of ice is multicolored and it lacks the ability to One-hit KO fighters instead it cause fighters to become frozen.

A Legendary Pokemon that emerged from the ashes of the Burned Tower, Suicune is a Water-type Pokemon easily identified by its long, purple mane. In battle, it'll head toward a nearby fighter and fire an Aurora Beam all the way to the to the edge of screen. If you get hit, you'll be frozen solid! 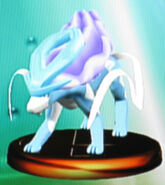 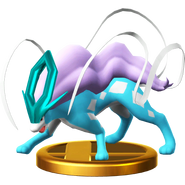 Add a photo to this gallery
Retrieved from "https://supersmashbros.fandom.com/wiki/Suicune?oldid=591527"
Community content is available under CC-BY-SA unless otherwise noted.