Being stunned is a special condition that leaves a character immobile for a short period of time. The most common way a character can become stunned is by shattering their Shield. When a character is stunned, they will be dazed for a few seconds and won't be able to move or attack. The only way for a character to snap out of this condition is through an attack of another character (unless the attack does not cause flinching) or waiting out the condition. A character can shorten the amount of time that they are stunned by button mashing. Also, bigger characters have lower stun times.

In the Mario Party Series, if the player is affected by dangerous areas or hazards they will feel dizzy. The "tweet" sound effects play while he/she is in this condition. 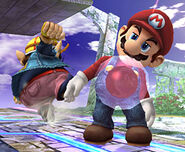 Mario stunned by Wario. A Gooey Bomb has been placed on him as well in Super Smash Bros. Brawl.

Zelda stunned in Smash Ultimate.
Add a photo to this gallery

Retrieved from "https://supersmashbros.fandom.com/wiki/Stun?oldid=583631"
Community content is available under CC-BY-SA unless otherwise noted.