Stone (ストーン) is Kirby's Down Special Move. Kirby transforms into a rock, becoming impervious to damage for a short time.

To do stone, you need to be in midair for it to hit. Thanks to Kirby's ability to jump multiple times, that is highly possible. when Kirby slams, he can either turn into a Thwomp, anvil, spike ball, crate, and of course, a stone. this attack does high damage and you should use it in any chance possible.

Kirby can still be taken out of Stone form by grabs or grab-type moves, such as Yoshi's Egg Lay or Lucario's Force Palm. He can deal damage by using the move in mid air and falling on opponents. When this is done, Stone does excellent knockback, making it useful for avoiding juggling. By pressing the B button again, or after some time, Kirby will return to normal.

In Brawl, the move is more powerful than in Melee, and it pushes characters away, even if used from the ground. However, very strong attacks and hazards are capable of knocking back Kirby out of his Stone form (it will take 30% to break him out of this form), such as the cars on the Onett stage, though he won't take any damage. If the hit is strong enough, Kirby will receive full knockback from it. 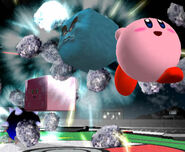 Stone transformations in Super Smash Bros. for Wii U

thwomp.
Add a photo to this gallery

In Super Smash Bros. 3DS/Wii U, Stone can be customized to Grounding Stone or Meteor Stone.

Grounding Stone is an excellent move for setting up combos since it buries opponents hit by it. The move could possibly combo into itself if timed correctly so that the opponent will be buried again as soon as they escape being buried, dealing damage and keeping them immobile. The move itself can also be a good edge-guarding tool, burying opponents that get up on the edge and knocking any recovering opponents off-stage again. Grounding Stone takes longer to execute, so Kirby can be easily interrupted while trying to start the move. Kirby can SD if he uses it off-stage, though this is unlikely to happen. Grounding Stone can be a good set-up for a powerful killing move such as a smash attack or the Hammer Flip.

Meteor Stone (メテオストーン, Meteo Sutōn?) has increased launch power while falling, but takes longer for Kirby to change back to normal.

Kirby's Meteor Stone has higher launch power, making it optimal for guarding the edge from recovering opponents. It will also meteor-smash opponents hit by it at certain parts of the move. Kirby takes more time to return to normal, resulting in higher ending lag on the move and therefore more risk when it is used off-stage as he may not be able to transform back before an SD occurs. Also, Kirby is easily exposed to grabs while the ending lag happens, making the move easy to punish if it misses.

Kirby custom moves
Add a photo to this gallery

The move is one of Kirby's copy abilities from Kirby's Adventure, behaving in much the same way. Kirby Super Star introduced the ability for Kirby to transform into various other stone objects, including a rarely seen golden statue of Mario or Samus. It seems that the games before Kirby Super Star, there was no sliding mechanic invented: though notably Kirby was able to roll down the hills first time in Kirby's Dreamland 2 (due the hexagonal shape of his stone form in that game). After Kirby Super Star, every Kirby-game has made use of the sliding mechanic for Stone Kirby, allowing him to roll down slopes in this form.

There is a glitch associated with this attack on the PictoChat stage, widely known as the Earthquake Glitch. If Kirby goes to the very edge on the right-hand side and use the Stone move, Kirby will create shockwaves that cause massive damage. This does not work on the left side, as Kirby will slide off the platform.

Retrieved from "https://supersmashbros.fandom.com/wiki/Stone?oldid=598882"
Community content is available under CC-BY-SA unless otherwise noted.