Steelix only appears as a random trophy.

A combination of Steel- and Ground-types, Steelix are the longest Pokémon yet to be discovered, reaching over 30 feet in length. Since they live so deep under the surface of the earth, the intense pressure has made their bodies stronger than diamonds. Evolved from Onix, Steelix is every bit as intimidating as its relative.

Steelix appears in Super Smash Bros. for Wii U on the Kalos Pokémon League stage as a stage Pokémon.

NA: With a body harder than diamonds, this Pokémon is well suited to digging, using its powerful jaws to tunnel around. Steelix lives deep underground--even deeper than its pre-evolution, Onix. Was it pride that made Steelix prove itself able to go farther? It's hard to say. We tried to dig around for clues, but we got tired after only 10 feet...

PAL: Being harder than diamond, Steelix can crush any rock with its jaw. It can also see in pitch darkness. Its territory lies deeper than its pre-evolution, Onix, a full 1000m below the surface. Does it consider its Onix brethren to be "below" it, even though they're higher up? It's hard to say. We may have to dig a little deeper into the matter. 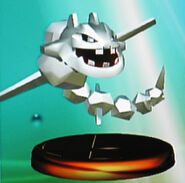 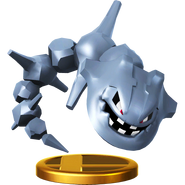 Steelix's Trophy in SSB4
Add a photo to this gallery
Retrieved from "https://supersmashbros.fandom.com/wiki/Steelix?oldid=547444"
Community content is available under CC-BY-SA unless otherwise noted.