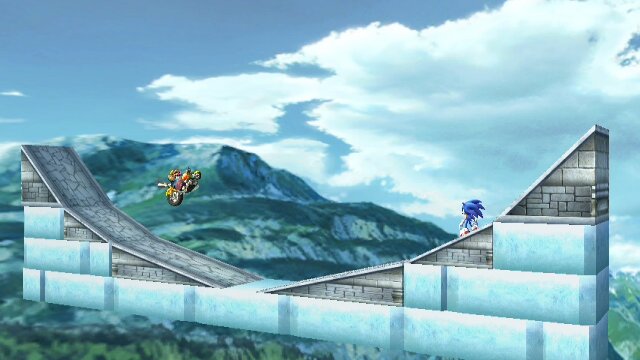 The Stage Builder is a feature in Super Smash Bros. Brawl that allows players to create their own custom stages. Builders must choose to create a small, medium, or large stage, which will affect the number of parts that can be placed and the location of blast lines. Next, the builder selects a theme: a mountain, a ruined building, or a futuristic chamber. Each theme has its own set of special stage elements which allow for slight variations in stage design depending on what theme is used. The final step before building is picking a song, which can be any track that has been unlocked (but only one song may be used per stage). Then, the terrain must be set. There are different structures and building materials the player can use depending on the background chosen earlier. There are three different also sizes for most of the structures. The player, however, is limited in the number of parts they can use per stage. Each piece used will use up so much memory for the map, and some pieces take up more memory than others. Once ready, the player can test the stage through the editor (you can only use Mario though), then switch back to the editing screen if they want to make any more changes. The players can also send stages to their friends, and they are compatible with SD cards. You can only have as many custom stages as however much room you have in your internal Wii memory and SD card.

Types of parts the player can use in this mode range from standard pieces, like blocks and ramps and stairs, to structures, like, ferris wheels, trees and mushrooms and rock arches, to features, like the Drop Blocks, which begin falling if stepped on long enough. Drop Blocks eventually respawn, and can only be activated from above, making it possible to make one-way doors of a sort. However, drop blocks will drop if items are spawned on them. To get the true effect of a one-way door, one must turn off items. There are also ice blocks. Walking/running on them lowers characters' traction (excluding the Ice Climbers) and there is high chance of tripping. Also the ledges of ice blocks can't be grabbed, which may lead to deaths if not aware of this. If the building area contains only features or structures (excluding the special blocks), the player may get an error message that says he/she must add horizontal platforms.

In addition, this mode comes packed with interactive terrain objects. For example, players can make platforms that will move up or down, or side-to-side. This will create many options for map makers. There are also "traps," like spikes for example, that can be implemented into the map. Ultimately, in this mode, you are limited by the player's own level of creativity (and memory usage). Many people have even modeled stages after Super Smash Bros. (Nintendo 64) and Super Smash Bros. Melee stages.

Ghost-1518 I currently working on the error!!

There are three catagories of parts: Floors, Structures and Features. In this following part the order will go by name, use, if it varied with the different theme (not texture) and how many cubic squares it uses.

There are also certain parts and features that can be unlocked to use in the Stage Builder. There must be an opening in your stage to fall out of in order to unlock parts A,B, and C. In other words, you can't make 15 CD factories and expect to unlock Edit Parts C. You must exit out of stage builder when you're done to unlock the challenge.

Retrieved from "https://supersmashbros.fandom.com/wiki/Stage_Builder?oldid=356583"
Community content is available under CC-BY-SA unless otherwise noted.