Official artwork of Squirtle from Pokémon FireRed and LeafGreen Versions.

Squirtle is a small blue bipedal turtle-like creature. It is also the first stage prevolution of Blastoise, with Wartortle as the evolutionary stage between them. In Pokémon (Red, Blue, FireRed, and LeafGreen versions), Squirtle is one of the three starters that the player can choose. It evolves into Wartortle at level 16 onwards and into Blastoise at level 36 onwards.

When it hatches, its shell is soft, and forms and hardens over time until it becomes resilient enough that prodding fingers will bounce off it. The shell is a great protective measure, and the Pokémon withdraws into its shell when in danger. The shell, in addition to protection, also has a rounded shape with grooves on its surface, which helps minimize resistance in water and enables it to swim at high speeds. When threatened, it withdraws into its shell and squirts out water with vigorous force.

Squirtle is a pure Water-type Pokémon and is one of 3 possible starter Pokémon in the Kanto and Kalos Regions, given by Professor Oak and Professor Sycamore respectively. Being a Water-type, it has the ability to produce and manipulate water at will. Squirtle are expert swimmers, and can easily outspeed a boat due to their hydrodynamic bodies. When threatened, it will use Withdraw, and hide in its tough, hydrodynamic shell. The shell is resistant to most attacks, especially Fire and Water-type attacks. The shell is what keeps a Squirtle's defense levels very high but it lowers Squirtle's overall speed stats as it is heavy.

Squirtle's main attacks are mainly of the Water-type as they can learn Bubblebeam, Water Gun, Waterfall, and the powerful Hydro Pump attack. These Water-type abilities gives Squirtle a large advantage over Fire, Ground and Rock-types. Squirtle have the ability to create foam from their mouths and can be used to create the Bubblebeam attack and can produce water internally to use for attacks. A Hydro Pump from a Squirtle is very powerful and can blast through some solid objects.

Squirtle are extremely rare Pokémon in the wild and are mainly found in captivity but in the wild, they live near freshwater bodies such as lakes and rivers.However, they can live in the ocean, as long as there is water nearby. Squirtle have two weaknesses: Electric and Grass-type attacks. They evolve into Wartortle at level 16 and eventually evolves into Blastoise at level 36.

Squirtle makes three minor appearances in this game. One of these appearances is a very brief cameo in the opening video.

A giant balloon of Squirtle (in actuality the 3D model of Squirtle used in Pokémon Stadium for Nintendo 64) is one of the many floating and bending "platforms" that comprise the Poké Floats stage. It is the first balloon in the stage and its head and arms are where the fighters start off on at the beginning of the match.

Squirtle features as a collectible trophy, unlocked as one of the 200+ trophies that can be collected randomly during normal play, such as in the Trophy Lottery and throughout the various Single-player Regular Matches. It reads as follows:

Squirtle
Retreating into its shell and spitting water at its foes is Squirtle's trademark response to danger. It's one of the three Pokémon that trainers can receive from Professor Oak in Pokémon Red and Blue. Squirtle evolves into Wartortle and then Blastoise, ramping up its water powers with each evolution. 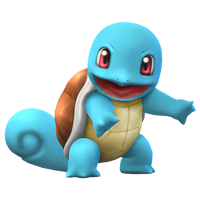 Squirtle appears as a playable character in Super Smash Bros. Brawl as one of the Pokémon Trainer's three Pokémon, with the other two Pokémon being Charizard and Ivysaur. Squirtle can be switched into or out of battle through the Down Special Move by the Pokémon Trainer, which operates similarly to the Zelda/Sheik transformation.

Squirtle
A Tiny Turtle Pokémon. In times of danger, it pulls its arms and legs inside its shell to protect itself from enemy attacks. When it conceals its neck, it also shoots a powerful stream of water from its mouth. Its shell not only protects its body, it also reduces water friction when it's in the water. When it levels up, it evolves into Wartortle.

Squirtle, along with Ivysaur, did not return as playable characters in Super Smash Bros. for Nintendo 3DS and Wii U. However, Squirtle does appear as a collectable trophy, which can be obtained in both versions of the game.

Squirtle
At the start of their Pokémon adventures, many aspiring trainers visit Professor Oak to choose one of three starter Pokémon. Squirtle's always a popular choice, what with it being so gosh-darn adorable. When it's in danger, though, it withdraws into its shell and spits a high-pressure burst of water—a bit less adorable.