For the item in the Super Smash Bros. series, see Spring.

Spring Jump is Sonic's Up Special Move as well his main recovery move. It acts as a personalized spring, causing a spring from the Sonic series to immediately appear underneath him, shooting Sonic up a great vertical distance.

When used on the ground, the spring remains in place for a while, allowing other characters to use it, too. If this move is used in the air, the spring falls downwards, acting as a projectile, making it effective for edgeguarding. After using this move, Sonic will not enter into helpless state; he still retains the ability to use normal aerial attacks and air dodges, but will be unable to use Special Moves until he touches the ground.

Additionally, this move does not allow Sonic to grab any ledges onstage (i.e. auto-sweetspot) until he is finished gaining vertical distance, making it dangerous for recovery if Sonic goes above a ledge and exposed to an edgeguarder. Barring any outside influence, the spring will remain on the ground long enough for Sonic to do three jumps off of, disappearing just as he makes his third jump. Unlike the Spring item, it will always face straight up, even on a steep slope.

If Sonic bounces off a previously set Spring, even his own, it doesn't count as his third jump, as long as he doesn't land on it immediately after using it, so he can use Spring Jump immediately afterwards, gaining a great deal of height, essentially two back-to-back Up Special Moves.

The starting frames of a Spring Jump. 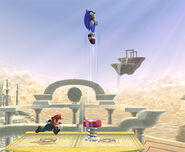 When Sonic uses this move on the floor, the Spring remains... 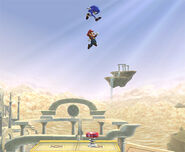 ...allowing his opponents to use the Spring as well.
Add a photo to this gallery

In Super Smash Bros. 3DS/Wii U, Spring Jump can be customized into Double Spring or Springing Headbutt.

Double Spring will not send Sonic as high, but he can use this twice in a row in midair.

Springing Headbutt will cause Sonic to spin straight up and deal a headbutt to anyone he hits, but it will not remain on the stage.

Many techniques are possible when the spring is placed on the ground, such as using Sonic's Down Aerial infinitely until it disappears to rack up damage at low percentages. Sonic can also dodge the sleep effect of Peach's Final Smash by bouncing on the spring.

Retrieved from "https://supersmashbros.fandom.com/wiki/Spring_Jump?oldid=583523"
Community content is available under CC-BY-SA unless otherwise noted.