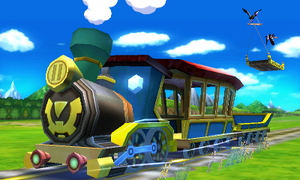 Characters can fight inside the carriage of the train. The roof of the carriage is a soft platform. The train is also towing another platform behind it. Birds will occasionally carry another aerial platform on-screen. Players can also stand on top of the train itself. The train is being driven by Toon Link, in his Spirit Tracks appearance. Toon Link stands in the background, and does not interact with the fighters. However, when Toon Link himself is a participant on this stage during battle, Alfonzo will be conducting the train instead.

The rear carriage will be able to "change" during battle, including being able to detach and move backward. 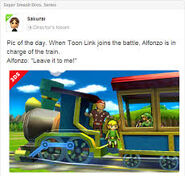 Retrieved from "https://supersmashbros.fandom.com/wiki/Spirit_Train?oldid=453916"
Community content is available under CC-BY-SA unless otherwise noted.