A Spiny Shell as it appears in Mario Kart 7.

The devastating blue Spiny Shell that normally appears in the Mario Kart series. This shell seeks out the lead racer and ruins his or her day. In Smash Bros., it will hover above one of the fighters before crashing down and exploding. Avoiding the impact can be challenging.

This item appears to be the most common variation of a Spiny Shell in Mario spin-off games, notably Mario Kart. It originates from Mario Kart 64, where it appeared as an incredibly rare item that would tear through the course in pursuit of the racer in 1st place, to whom it would deliver a massive blow; it would also bash through any other racers and items that happened to be in the way. It is one of the most notorious items in the series, stalling the target for an extremely long time and being nearly impossible to avoid once thrown, even when predicted. Later games in the series gave the shell wings and a large explosion upon touching down on the leader. It still explodes upon impact and flies, but at a much lower trajectory, being able to hit racers that happen to be in its path like before. Its design in Super Smash Bros. for Nintendo 3DS and Wii U is taken from its appearance in the latest Mario Kart games: Mario Kart 7 and Mario Kart 8 Deluxe. 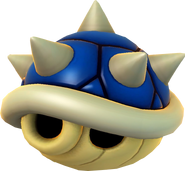 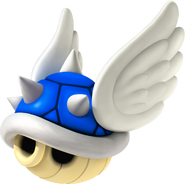