Spin Dash (sometimes spelled Spindash) is Sonic's Side Special Move. It is a chargeable move, similar to Rollout. It makes Sonic do a short hop when it initiates, before he spins down the stage in a ball, damaging anyone he touches.

Unlike Spin Charge, this move can be used as a mean of horizontal recovery. Both attacks move approximately the same speed once on the ground, and both can be changed direction once initiated. Spin Dash is slightly stronger than Yoshi's Egg Roll, as Yoshi's Egg Roll breaks upon impact with projectiles that cause flinching, or well timed attacks. Spin Dash simply stops in function, and cancels out any damage. If the Spin Dash collides with the Egg Roll, both attacks are negated.

This move is one of the most defensive moves in Sonic's arsenal. It can be shield-canceled any time before it is fully charged. Spin Dash also has invincibility frames at the very beginning. If Spin Dash is performed at a slope, the hop will instantly transition into the regular ground dash move, with the exception of the dash having a far higher priority, making it capable of clanking with highly disjointed attacks. 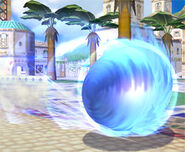 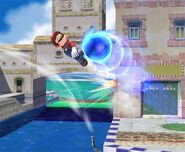 When Sonic uses Spin Dash, he does a short hop... 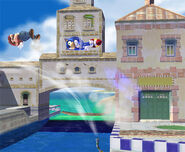 ...allowing him to use an Aerial Attack... 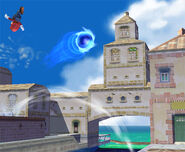 ...and then Spin Dash back to the stage.
Add a photo to this gallery

In Super Smash Bros. 3DS/Wii U, Spin Dash can be customized into Hammer Spin Dash or Burning Spin Dash.

Hammer Spin Dash starts off with a huge leap that will bury any opponent it hits, but it is weaker than the original.

Burning Spin Dash is a more powerful version of Spin Dash that does not give Sonic a hop at the start, and Sonic cannot jump as high while doing this.

If Spin Dash is jump canceled immediately upon release, Sonic will perform a fast, long-reaching short hop referred to as a "spinshot," out of which he can perform any move except his midair jump.

The Spindash was introduced in Sonic the Hedgehog 2. It is a variant of the Spin Attack.

Retrieved from "https://supersmashbros.fandom.com/wiki/Spin_Dash?oldid=587354"
Community content is available under CC-BY-SA unless otherwise noted.