Unknown
Spewpa, or Kofurai is a Pokeball Pokémon in Super Smash Bros for the Nintendo 3DS and Wii U. Spewpa will use Stun Spore whenever attacked, paralyzing the opponent.

NA: Spewpa, the Scatterdust Pokémon. This Bug-type Pokémon can harden its body to protect against attacks. If attacked in Smash Bros., it'll bristle up and paralyze its opponent with Stun Spore. However, it won't do anything if you don't attack it. Don't mess with it—it won't mess with you.

PAL: Spewpa, the Scatterdust Pokémon. This Bug-type Pokémon can harden its body to protect against attacks. In this game, it might bristle up and paralyse you with Stun Spore. "How ever can I avoid such a terrible fate?", you ask? Just leave it alone. Don't mess with Spewpa, and Spewpa won't mess with you. 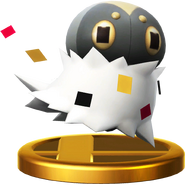