Sonic as he appears in Team Sonic Racing.

Sonic is a male, teenage anthropomorphic Hedgehog. He has spiky blue hair, green eyes, and red running shoes. He is only one meter (3ft 3in) tall (though, in his appearance in Super Smash Bros. Brawl, his height is obviously increased). As his name suggests, he is capable of running at supersonic speeds. The self-described "coolest, blue-est hedgehog alive", he has a bit of an attitude and is impatient, but cannot resist helping someone in need.

He values freedom above all else, and constantly campaigns to free animals imprisoned by the evil Dr. Robotnik (also known as Dr. Eggman). Generally speaking, Sonic loves being able to do what he wants and loathes being constrained. He gathers golden rings for energy, and when he collects the seven Chaos Emeralds, he becomes Super Sonic, with yellow fur and red eyes, capable of flight. Most of the time, every challenge he faces seems fun to him; another chance to get moving. However, he does take time to relax once in a while. Sonic is easy and caring, he's laid back very much.

Sonic, along with Tails, was rumoured to be unlockable in Super Smash Bros. Melee by defeating 20 Fighting Wire Frames in Cruel Melee. This turned out to be an April Fools' Joke by EGM. However, he was indeed requested to appear by Yuji Naka but was not added due to the game already being far in development.[1] 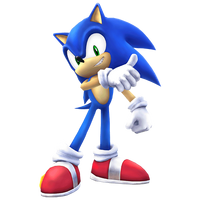 Sonic was confirmed to be a playable character in Super Smash Bros. Brawl, on October 10th, 2007. He has the fastest running speed in the game, with his attacks based largely on his earlier platforming games, and some from the obscure game Sonic the Fighters. Sonic's Final Smash, Super Sonic, is a very powerful transformation and it allows him to fly around the stage at incredible speed. Sonic also appears very late in Subspace Emissary, the game's story mode, helping to defeat Tabuu in the final battle.

Sonic
The world's fastest hedgehog, who can run at supersonic speeds. Generally speaking, he loves being able to do what he wants and loathes being constrained. Holding still is something he would never consider. He's got a bit of an attitude but can't pass by someone in trouble. When he collects the seven Chaos Emeralds, he transforms into the mighty, gold Super Sonic. 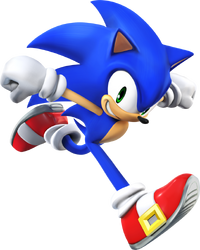 Sonic reappears as a playable character in Super Smash Bros. for Nintendo 3DS and Wii U, being announced on October 1st, 2013 to commemorate Sonic Lost World being released that month. This time around, he is a starter character, meaning he does not need to be unlocked. Sonic's English voice actor has been changed to Roger Craig Smith, who succeeded Jason Griffith in 2010, and now has a different voice actor in different regions. His appearance has been updated to reflect his design in his more recent games such as Sonic Colors, which in turn are based on official 2D and CG artworks.

Sonic's moveset is almost completely unchanged from Brawl; with only real changes is that his Dash Attack now has him performing a flying kick at the end of the attack and his Down Smash is now a split-kick attack.

Sonic the Hedgehog
The main star of the Sonic the Hedgehog series. He's an easygoing hedgehog who blows past the competition with his speed. Seriously, on the ground he's faster than anyone else in Smash Bros. Use this to your advantage, avoiding blows while landing lightning-fast attacks.

Sonic (Alt.)
Sonic's up special Spring Jump lets him reach great heights by jumping on a spring, becoming invincible for a moment. He can't use any other specials during the jump, but he can attack or dodge. This move's great for returning from a long launch. Other fighters can use the spring, though!

Sonic was confirmed to be a part of Super Smash Bros. Ultimate alongside every character in Smash Bros history at E3 2018.

Retrieved from "https://supersmashbros.fandom.com/wiki/Sonic_the_Hedgehog?oldid=588923"
Community content is available under CC-BY-SA unless otherwise noted.