Smashpedia
Register
Don't have an account?
Sign In
Advertisement
in: Characters (SSBWU/3DS), Amiibo, Sonic the Hedgehog universe,
and 8 more

Sonic (Super Smash Bros. for Nintendo 3DS and Wii U)

This article is about Sonic's appearance in Super Smash Bros. for Nintendo 3DS and Wii U. For other uses, see Sonic the Hedgehog.

Sonic is a returning character from the Sonic universe who appears in Super Smash Bros. for Nintendo 3DS and Wii U. His return was announced during the Nintendo Direct on October 1st, 2013 to commemorate the release of Sonic Lost World.

He currently ranks 7th on the tier list (tied with Fox), a huge jump from his placement in Super Smash Bros. Brawl (where he was ranked 22nd out of 40 on the tier list). Also making him the highest ranked non-DLC 3rd party character. Sonic possesses a very fast attack speed, the fastest dash in the game, and numerous approach options in his Special Moves. However, Sonic lacks reliable KO options, and is susceptible to projectile camping.

Sonic has been buffed in terms of knockback and priority. Most of his KO moves are now more powerful. However, he has few nerfs to balance him overall.

The star of the Sonic the Hedgehog series. He's an easygoing hedgehog who blows past the competition with his speed. Seriously, on the ground he's faster than anyone else in Smash Bros. Use this to your advantage, avoiding blows while landing lightning-fast attacks.

Sonic's up special Spring Jump lets him reach great heights by jumping on a spring, becoming invincible for a moment. He can't use any other specials during the jump, but he can attack or dodge. This move's great for returning from a long launch. Other fighters can use the spring, though! 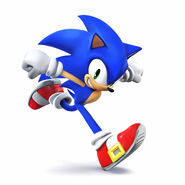 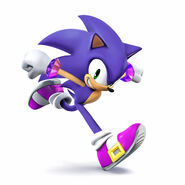 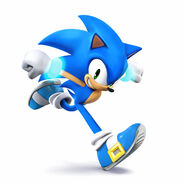 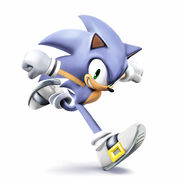 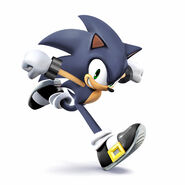 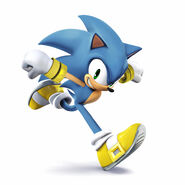 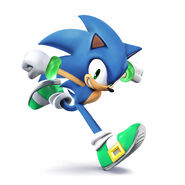 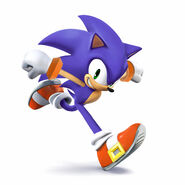 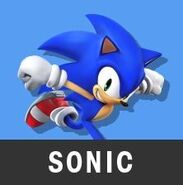 The pic of the day revealing Sonic

Sonic hitting Pit with the Ore Club while fighting in Palutena's Temple. 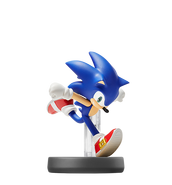 Sonic in his Super Sonic form as his Final Smash.