When unlocked, he is fought at Shadow Moses Island.

Snake has been a very popular character in Ultimate's first year; the PGStats team found that within over 3000 PR ranked players worldwide, Snake was the most popular character [2]. The character’s multiple strengths, including a frame 1 option to break combos, great edgeguarding tools, guaranteed kill setups at higher percents, enabled mains to develop a vibrant metagame. Through the early stages of the competitive scene, he was widely considered to be a top three character in the game, as characters did not develop proper defensive countermeasures. Following Ally's ban and a slightly slower pace of the game, however, Snake mains were unable to match the same successes as prior. MVD has gotten multiple 49th place or lower placings at majors, Salem has had inconsistent placings and primarily used Hero in bracket, and Shogun held relatively few tournament placings outside of Japan, while his domestic results are not as strong as his international placings. Additionally, players began to discover matchups that he struggles in, such as Mega Man, Zero Suit Samus, and Inkling. Players have also developed more counterplay to his lacking disadvantage state and mobility by respecting his strong arsenal of projectiles and playing more patiently.

In the return to offline competitive play, Snake has been seeing a lot more results than in the months prior to the pandemic. Snake mains, such as MVD, ApolloKage, Ronnichu, and AlanDiss, have been placing consistently well in recent tournaments, with the former winning SWT: NA West Ultimate Regional Finals, as well as placing high in Super Smash Con: Fall Fest and Low Tide City 2021. Due to these results and his strong matchup spread, Snake is widely considered to be a top tier character, or potentially top 10 in the game.

Snake was among the fighters that were summoned to the cliffside to fight against the army of Master Hands.

During the opening cutscene Snake was present on the cliffside when Galeem absorbed the Master Hands and unleashed his beams of light. While the other fighters were attempting to deflect or dodge the beams, Snake hid in his cardboard box; this obviously proved useless, as a beam of light vaporized him and his box, placing him under Galeem's imprisonment along with the rest of the fighters, except for Kirby (humorously, the box itself is also a spirit that can be obtained in World of Light).

Snake can be found in the Base sub-area reminiscent of his series, where Galleom is fought. 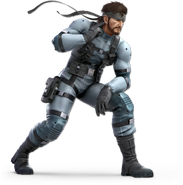 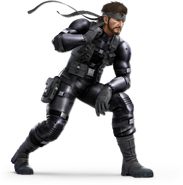 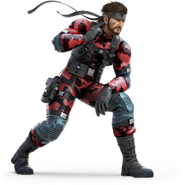 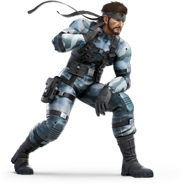 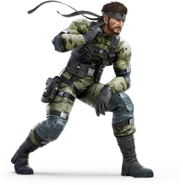 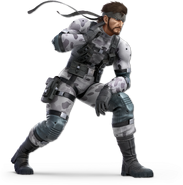 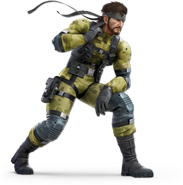 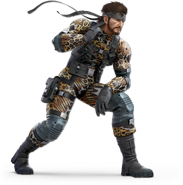 Snake using his Side-Special on Coliseum.

Luigi doing his jab on Snake.

Snake and Ryu on Shadow Moses Island with a Super Scope item.

Snake along with Joker and Kirby in the Mementos stage.

Snake along with Mario in the Shadow Moses Island stage.

Snake along with Mario, Sonic and Kirby in the Shadow Moses Island stage.