Smashville is a stage for Super Smash Bros. Brawl, based off of the Animal Crossing franchise. Players battle on a platform with a moving horizontal jump-through platform suspended above an Animal Crossing town while spectators watch on. The stage's scenery changes from night to day depending on the Wii's internal clock. K.K. Slider plays at 8:00 PM on Saturdays.

Coincidentally, it is impossible to name a town Smashville in the currently released Animal Crossing - the maximum amount of characters allowed is eight, but Smashville is ten letters long.

The stage goes along with Wii built-in clock. In winter, it is covered by snow. At night, it gets darker save for a few lights. Also, on Saturdays 8.00 PM-12.00 PM, K.K. Slider will perform one of six different songs.

Also, small, red balloons sometimes float overhead, usually holding food, but the balloons can be popped with one hit.

(The following songs only play on Saturday night's K.K. concert) 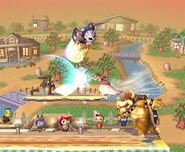 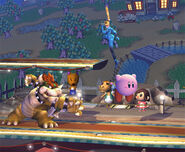 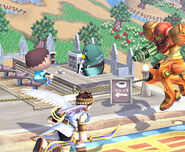 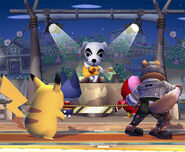 Retrieved from "https://supersmashbros.fandom.com/wiki/Smashville?oldid=167442"
Community content is available under CC-BY-SA unless otherwise noted.