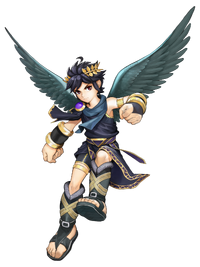 Dark Pit, or Black Pit (ブラックピット Burakku Pitto) in Japan, is a character from Kid Icarus: Uprising. He will be playable in Super Smash Bros. for Nintendo 3DS/Wii U. Dark Pit is a clone of Pit made by the Mirror of Truth. He serves as a rival to Pit and dons a portrayal of an antihero-like personality. He is nicknamed "Pittoo" by Palutena, Pit, and other characters, much to his chagrin.