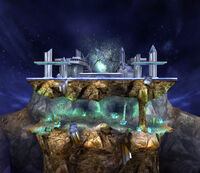 Spear Pillar is a stage that debuted in Super Smash Bros. Brawl. Hailing from the Pokémon Universe, Spear Pillar is a location in Pokémon Diamond and Pearl where the player battles Dialga or Palkia. As a playable stage, Spear Pillar is two platforms roughly the size of the base of Battlefield, one on top of the other, with two smaller platforms moving up and down above them. What sets this stage apart from other stages is the presence of the Pokémon. After the battle beings, Dialga, Palkia, or Cresselia appears and beings to mess with the players. Dialga and Palkia create beams of energy to attack the players, as well as causing temporal shifts in time and space. Cresselia instead creates sickles that fly around the stage, causing large knockback to any character they hit...(more)