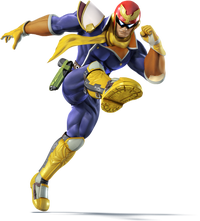 Captain Falcon is the main protagonist of the F-Zero racing games. Despite not appearing in a game since 2004, Captain Falcon has continued to be a beloved character in the Super Smash Bros. series. Being one of the Original 12 characters which have appeared in every game, Captain Falcon was confirmed for Super Smash Bros. for 3DS and Wii U on July 14, 2014. His moveset remains practically unchanged, but he has been shown to have been greatly buffed since Brawl.