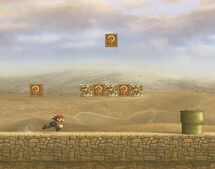 Mushroomy Kingdom is a stage in Super Smash Bros. Brawl from the Mario universe. It is based on the iconic level 1-1 of the original Super Mario Bros., though the background has been changed to that of a sweeping desert reminiscent of New Super Mario Bros. The layout of the original level has been preserved through the inclusion of such things as Warp Pipes and ? Blocks, which even release items when attacked. Its side-scrolling motion and extremely shallow blast lines are the main reasons it is banned in tournaments. Additionally, the stage has a 50-50 chance of loading a similar stage based on the underground 1-2, also of Super Mario Bros... (more...)