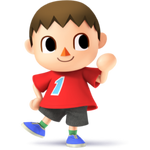 Villager is a character from the Animal Crossing universe. He is the first Animal Crossing character to be playable and will make his first appearance in Super Smash Bros. for Nintendo 3DS / Wii U, although trophies, stages, and an Assist Trophy have represented the series since Melee.