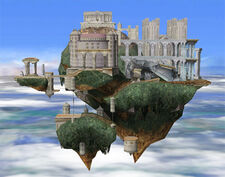 Temple is a stage that debuted in Super Smash Bros. Melee and it appears again in Super Smash Bros. Brawl as a Melee Stage. It is based on the Legend of Zelda series, specifically Zelda II: The Adventure of Link. It is also commonly known as Hyrule Temple, though the "Hyrule" technically denotes its stage location. It is notoriously large; in fact, the only stage to rival its size is New Pork City. Despite having no stage hazards, the stage is almost always banned from tournaments due to its size. Its My Music selection in Brawl is unique in that it includes a new song, entitled Great Temple / Temple. The stage also has given rise to such tricks as the Hyrule Jump... (more...)