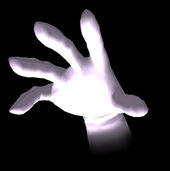 Master Hand is a recurring boss in all three games of the Super Smash Bros. series. He has been the boss of the 1P Game or the similar Classic Mode, and in Melee and Brawl he is sometimes paired with his opposite, Crazy Hand. His stamina must be depleted to defeat him. No matter what game he is in, he is always fought on some version of Final Destination. Master Hand also appears in The Subspace Emissary in Brawl. He is controlled by Tabuu through the Chains of Light and is used as a subordinate in the Subspace Army. Eventually Master Hand attacks Tabuu, but is defeated. Master Hand is never legally playable... (more...)