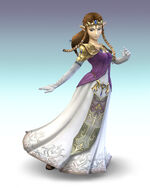 Zelda is a returning character in Super Smash Bros. Brawl. Originally from the Legend of Zelda Universe, Zelda is the princess of the kingdom of Hyrule. As a fighter, Zelda fights with her magic attacks, presumably endowed from her possession of the Triforce of Wisdom. These magic attacks tend to require precision on the part of the player, especially her aerial attacks. Her aerials have extremely small (in both size and frames) sweetspots. If she misses these sweetspots, the attacks are incredibly weak; but if the sweetspot hits, they are among the most powerful attacks in the game. Due to the high knockback of most of her attacks, Zelda players rely less on combos and more on tech-chasing and edgeguarding. For edgeguarding, Zelda wields one of the most effective projectiles in the game: Din's Fire. Unlike many attacks, Din's Fire becomes stronger and larger the farther it travels. Zelda is also able to transform into Sheik if the situation requires...(more)