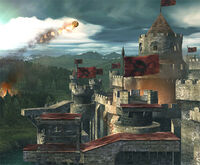 Castle Siege is a stage in Super Smash Bros. Brawl from the Fire Emblem universe. Unlike many universe based stages, Castle Siege is not based on any single event in the games, but on a combination of themes in the games. The stage is also unique in that it is actually three different stages that cycle through each other during the match. The stage beings on the top of the castle, but quickly descends into the interior of the castle. Here, the players find an opulent room complete with destructible statues. Eventually, the players descend to the area below the castle where a single flat platform above a poll of lava is all there is to battle on...(more)