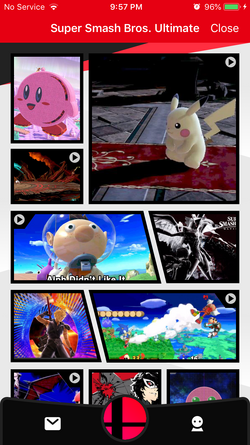 The service allows players to share their own creations including replay data, videos, spectations, Mii Fighters, and custom stages to be downloaded by others. Videos made from the Video Editor can also be posted there. Players can also use voice chat in battle arenas and build spirit teams, which can then be synced to the game. The app will also send in-game notifications about Ultimate and will consistently receive updates in the future.

In the service in the app, only videos, custom stages, and screenshots are seen. Stages can be queued for download in the app to use in the game.

From the 6.0.0 update and onward, special attacks of Mii Fighters uploaded to Smash World can be changed when downloaded. Fighters uploaded before the update will still have their specials locked from editing.