Smashpedia
Register
Don't have an account?
Sign In
Advertisement
in: Featured Articles, Modes, Super Smash Bros. 3DS/Wii U,
and 4 more

Smash Run (Japanese:フィールドスマッシュFīrudosumasshu) is a new game mode exclusively for Super Smash Bros. for Nintendo 3DS that was revealed during the Smash Bros Nintendo Direct on 04/8/2014.

The first part of the mode happens in a gigantic labyrinth, similar to the Great Maze from the Subspace Emissary mode seen in Super Smash Bros. Brawl. Players are tasked with exploring the vast field and defeating enemies to collect power-ups, which boost the characters' stats. There are 6 types of boosts:

The effect of those power-ups can be stacked. The larger the power-up is when dropped by the enemy, the higher is the resulting boost.

Being hit by enemies too much will also make the characters drop those power-ups; and some, such as Tac, can steal the player's stats, but can be recovered by killing it before it escapes the screen. This match lasts for 5 minutes, and the goal is to collect as many power-ups as possible. When the time limit is up, players carry the boosts collected into the second phase.

Aside from power-ups, players can also collect Smash Coins (which can be spent on other modes), trophies, equippable items, and Special Move customizations.

To keep track of players, a feature called "News Smash!" will sometimes announce what the other characters are doing, such as opening treasure chests and defeating a number of enemies. At the end of the first phase, players will be taken to a results screen, where they will be shown their current stats, along with their opponents. You can also turn your stats page into maps by clicking on the map, which will give players a rough sketch on where they and other players are.

It is worth noting that your only interaction with the other players during the first portion of Smash Run will be through the Smash News. While the mini-map on the touchscreen shows the players location, if someone is in the same location as the other player, the player won't find anything, meaning that players can't interact with each other.

The second part of the mode is the Final Battle, where players will compete with each other with their enhanced abilities. The battle type is randomly chosen and the players battle using the power-ups they collected.

There are a variety of smash battles that can be chosen for the final battle. Unless otherwise stated, all smash battles are Free-for-All or Team Battle, any stage, all items, 1-minute timed battles. The maps used are all non-DLC maps with Omega Form disabled.

These final battles are not traditional player-against-player fighting battles. They have different objectives and settings from smash battles.

From time to time, events will occur in the first phase. All players will be subject to similar conditions and they will use their techniques to power up and proceed. These events vary from defeating hordes of powerful enemies to simply having some of their stats increased. Similar to Subspace Emissary, some of those events can be accessed by entering hidden doors, which will take players to small instances.

The amount of events and the time of the events vary for each Smash Run attempt. Going into a challenge door will remove event buffs/debuffs affecting the player. 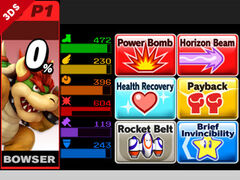 Players can carry equippable items and use them (by tapping their icons in the touch screen) to improve their performance in Smash Run, by granting them special buffs and effects. Those special items can be obtained by defeating powerful enemies or by finding them in treasure chests scattered around the maze. The level of an item is proportional to the strength, number of uses, and weight. They can be equipped in a menu, the players can change how the items are set up by touching their icons and dragging them in other blank icons, if the X button is pressed, they will be randomly placed.

The types of items varies: from health recovery and invisibility to summoning meteors from the sky. Some of the items also allow the players to hold weapons, such as the Beam Sword.

These items can not be used on both phases of Smash Run, only on the first.

Challenge Doors can be found randomly throughout the map as double doors with a shining aura behind it. Players can enter them to get various instances, some with various difficulties:

If you manage to complete the objective of the game, depending on difficulty, a chest will appear in the middle of the arena. It contains large stat boosts (200+, never a star), and two items. You get one large stat boost on Easy, two on Medium and three on Hard.

You will be placed in an instance where obstacles and enemies will appear. You must avoid being KO'ed to complete the objective. They may include the following:

Once the time limit is over, all enemies and hazards will disappear. You may defeat the enemies if you wish for stat boosts.

You will be placed in an instance where there are crystals to destroy. The difficulty given determines the number of crystals and their durability:

Main crystals are counted in this challenge; the offshoots from them do not. When attacking them, an "X" may appear on the crystal; hitting that area will deal extra damage.

You will be placed in an instance where red targets appear and must be destroyed.

You will be placed in an instance where you must complete several waves of enemies. All enemies of the current wave must be defeated to proceed to the next wave. In Normal and Hard Wave Smash, the floor will alternate between a regular and Danger Zone platform; anything that touches the Danger Zone platform will be instantly KO'd.

You will be placed in an instance with one of the following: 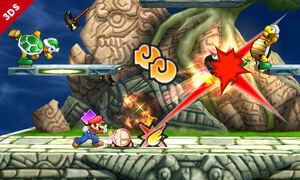 This ever-changing cast of enemy characters will be randomly placed in the maze. More powerful enemies drop lots of boost items. They are also more likely to drop custom parts and other rare items. Stronger enemies are usually placed around the edges of the maze, and on the tower if one appears.

Enemies will flash red and have smoke around them as their health is low, a visual indication that the player is closer to defeat them. When defeated, most enemies will create a cannonball effect (a Mite can create a cannonball effect, while a massive enemy like a Clubberskull just disappears in a flash of light) which can hurt other enemies, and if other enemies are defeated off-screen then the player will be given less stat boosts.

Stat boosts are items that appear when you defeat enemies during Smash Run. You can also just find them lying around or hidden in treasure chests. There are six types of stat boosts that each affect a different stat, and the bigger the icon, the bigger the boost. Look for the star-shaped stat boosts, too—they boost all your stats at once!

In Smash Run, defeating an enemy or opening a treasure chest might net you some gold. The coins come in three varieties: gold-the most valuable-then silver, then bronze. You can use them in the game for things like buying trophies or placing bets in Spectator mode. Just choose your bets wisely!