The Smash Ball appears as a multicolored sphere resembling the Super Smash Bros. logo. In 3DS/Wii U, Smash Balls will pulsate and leave multicolored trails in their wake when roaming around the stage.

In order to use it, fighters must break it by landing attacks on it. Any Assist Trophy character or Pokémon summoned by the player can contribute to breaking the Smash Ball, though they will not actively chase after it, and thus only deal damage if the Smash Ball is in close proximity with them. It should be noted that the resistance of the Smash Ball to attacks will gradually decrease the longer it remains on stage, so a "fresh" Smash Ball will need to take 43% damage to break, and less damage the longer it is on the field. The Smash Ball can be knocked back by attacks, though the amount taken varies as well.

Smash Ball in Super Smash Bros. Ultimate may have a chance to spawn with physics akin to a Soccer Ball. If this iteration of Smash Ball is not broken after some time has passed, instead of floating away, it will vanish just like usual items. 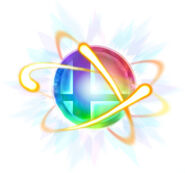 The Smash Ball with a new look in Super Smash Bros. for Wii U. 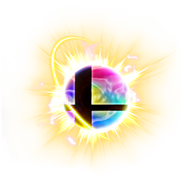 The Smash Ball as it appears in Super Smash Bros. Ultimate.