This article is about the stage for multiplayer use. For the Subspace Emissary side-scrolling stage, see Skyworld (SSE).

Starter (Brawl and Wii U)

All the platforms are breakable, excluding the bottom platform below the main platform. When they are broken, all that is left is the clouds they were on top of. You can stand on the clouds and drop through them as well. Players can be launched through the clouds at a high enough speed.

The stage is banned in most tournaments as the platforms are not passable until they are broken. Additionally, the unique platforms cause an over-reliance on stage spikes.

The stage is banned in most competitive tournaments as the unbroken platforms can create a "Cave of Life", allowing for techs and unusually high damage percentages. Additionally, the unique platforms cause an over-reliance on stage spikes.

Sky World is the third level for Kid Icarus and its sequel Kid Icarus: Of Myths and Monsters. The majority of the elements in this stage are made up for Smash and have no origin, with a few exceptions: In Kid Icarus's Sky World, there are platforms that are made out of stone and some that are clouds. Throughout the level, there are columns that go through the cloud platforms and support some of the stone platforms. In this stage in Smash, the main platforms are made out of clouds with destructible stone platforms on top. In the background can be seen numerous columns. Also in Kid Icarus are floating platforms that go from one side of the level to the other, which Pit can use to his advantage to reach his destination. In Smash, there are times where a floating platform towards the bottom of the stage will go from the left side of the stage to the right.

A few glitches can occur in Skyworld: 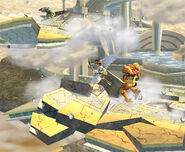 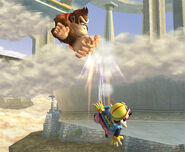 Clouds, in place of the platforms.

The Omega form of Skyworld.