It is similar to Luigi's Green Missile, only without the chance of a misfire and neither Pikachu or Pichu can hold the charge infinitely.

The move can be charged up to increase the damage and range of the attack. Pichu can charge for longer, but hurts itself upon releasing (1%); the distance covered and the knockback when fully charged is tremendous, dealing almost 40% and nearly covering the length of Final Destination. It is used in most Home-Run Contest strategies in lieu of the bat (fully-charged, Skull Bash is nearly a one-hit KO from Pichu).

In Brawl, Skull Bash charges much faster than in Melee, and is an excellent move to recover with as Pikachu does not enter a helpless state after using it in midair. When fully charged, Pikachu will go about as far as the size of Final Destination. Though, unlike the Green Missile, the charge can't be held, and when fully charged, Pikachu will shoot forward. Even with its great distance, it's not used too often as Pikachu falls at a quick speed and the move itself is predictable. In Melee, Skull Bash has an electric effect when it hits, but not in Brawl. 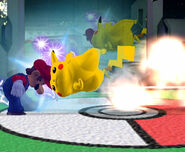 In Super Smash Bros. 3DS/Wii U, Skull Bash can be customized into Shocking Skull Bash or Heavy Skull Bash.

Shocking Skull Bash is one of Pikachu's custom side special moves. It hits multiple times and does electric damage.

Heavy Skull Bash is Pikachu's other custom side special. It is fast but goes less distance.

In the main Pokémon games, Skull Bash is a two turn Normal-Type move. On the first turn, the Pokémon will tuck in its head and raise its Defense level by one. On the second turn, the Pokémon will attack and keep its raise in Defense level. In Generation II, it was the signature move of Squirtle and its evolutions of Wartortle and Blastoise. In Generation VI, Skull Bash's power was raised from 100 to 130.