Smashpedia
Register
Don't have an account?
Sign In
Advertisement
in: Attacks, Special Attacks, Down Special Moves,
and 4 more

Skull Barrier (スカルバリアー Sukaru Bariā) is Mega Man's Down Special Move that can be used via Customizations in Super Smash Bros. for Nintendo 3DS and Wii U. Mega Man creates a skull-shaped energy shield that surrounds him for one second.

The Skull Barrier has pushboxes while it spins around Mega Man, short-ranged as they may be. The move does not deal damage until actually thrown. While it surrounds Mega Man, it will reflect projectiles, providing Mega Man with both a defensive and offensive move. It has very little range when thrown, though throwing it won't do much damage, so it is actually better to hold onto it until it vanishes. Mega Man can't use any of his up special variations when the Skull Barrier is up, so Mega Man should not use it if trying to get back to the stage. 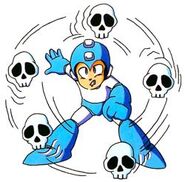 Mega Man receives this weapon by defeating Skull Man in Mega Man 4. Unlike its incarnation in the Smash Bros. series, Mega Man wasn't able to throw it, and it was able to hit enemies rather than pushing them.