Sing (うたう, Utau?) is Jigglypuff's Up Special Move. Soundwaves and music notes ondulate from its body. All non-airborne opponents within range will fall asleep for a brief period of time.

This attack does no damage to playable characters, disabling opponents instead to set up for a powerful attack. Similar to a grab, opponents can escape the sleep state more quickly by rapidly moving the control stick. In Melee and Brawl, the more damage the opponent has, the longer he/she will remain asleep. However, in Super Smash Bros., the opponent remains asleep for a longer time if he/she bears a low damage. The time the opponent remains asleep is shortest when bearing any damage over 300%.

Unlike most Up Special Moves, this is not a third jump, since it gains virtually no height. Instead, players utilize Rollout or an air dodge (Melee) to recover, or simply use Pound in tandem with Jigglypuff's multiple hops.

Timing of this move is crucial, as opponents who fall asleep at the beginning may wake up before Jigglypuff finishes singing. This move leaves Jigglypuff very vulnerable to counter-attacks, which is why people tend to use the move in midair.

Sing can be used in team battles very effectively by having Jigglypuff put enemies to sleep, then having its teammate use a fully charged Smash Attack or powerful special attack like Falcon Punch on the sleeping victim(s). 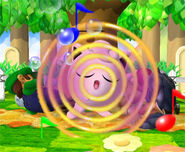 Sing in Brawl.
Add a photo to this gallery

In Super Smash Bros. for Nintendo 3DS and Wii U, the move can turn into Hyper Voice and Spinphony via Customizations

Hyper Voice deals high damage and knockback to surrounding opponents, but does not make them fall asleep. However, it's slower than Sing.

Spinphony damages opponents and turns them around. However, it's even slower than Hyper Voice.

Spinphony is by far one of if not the worst custom moves of any character. The move spins the opponent similar to Mario's cape. The first hit does no damage, the second does 1%, and the third does 2%. doing a low 3% total, it also doesn't have any noticeable knockback. the move has a lot of startup, end lag, and is executed very slowly, as a result Jigglypuff is very vulnerable using this move and when used at the top of the stage still K.Os Jigglypuff. it can gimp a recovery, but flinching gives character there Up Special Move back making Spinphony poor at this too and heavily inferior to what is an already bad move

Spinphony
Add a photo to this gallery

In Melee and Brawl, if Jigglypuff sings when near a ledge, it will grab the ledge and the singing will be canceled, but if there is an opponent near enough, they will fall asleep. This is called a "Quick Sing." This can be used to set up combos.

Sing is a non-damaging Normal-type move in the main series Pokémon games and it simply puts the opposing Pokémon to sleep for 1-3 turns regardless of how much damage the enemy has accumulated over the battle. With a terrible accuracy of only 55%, Sing is often not used in the Pokémon games due to its poor accuracy.

Retrieved from "https://supersmashbros.fandom.com/wiki/Sing?oldid=588239"
Community content is available under CC-BY-SA unless otherwise noted.