This article is about Shulk's appearance in Super Smash Bros. Ultimate. For other uses, see Shulk.

When unlocked, he is fought at Gaur Plain.

Back air comes at a more straight angle rather than the Wii U version's slight upward tilt.

Early in Ultimate's lifespan, many pro players placed Shulk as a high tier or even occasionally a top tier character in their own tier lists; however, Shulk lacked the strong results and representation of many other high tiers and top tiers at the time. Part of this could be attributed to his high learning curve and usage of advanced techniques such as Dial Storage, resulting in fewer players using the character. As such, Shulk remained a rare yet dangerous character in the early meta. Shulk players have gradually seen more success, with Kome winning Sumabato SP 10, placing 3rd at 2GG: SwitchFest 2019 and placing 2nd at EVO Japan 2020 while Nicko proceeded to win Play With Heart and placed 2nd at Port Priority 5. Due to these results, Shulk now has seen a moderate degree of success, although still lower than other sword wielding characters in the game like Roy and Lucina, with now some players considering him potentially the best swordfighter in the game. Players often cite his large disjoints and usage of Monado Arts to escape combos and kill confirms as some of the character's best strengths. Shulk also has a terrific matchup spread, including positive matchups against meta relevant characters such as Mario, Peach, Mr. Game & Watch, Zero Suit Samus, Olimar and Young Link while having disadvantageous matchups against Pikachu, Palutena, R.O.B. and Snake. Overall opinion on Shulk's placement in the game's tier list has been slowly shifting into unanimous high tier or top tier status, and ESAM and Marss think the character is top 5.

Each of the opponents represent one of Shulk's Monado Arts and are fought in the cycling order of each Art in Super Smash Bros. 4. The penultimate battle against Mega Man continues the theme by having Mega Man represent Monado Enchant from Xenoblade Chronicles (represented by the kanji for "Machine"), which references that Art's ability of allowing Shulk's party to damage Mechon with conventional weapons.

Shulk was among the fighters that were summoned to fight the army of Master Hands.

After the Master Hands begin turning into energy for Galeem to absorb, Shulk experiences a vision where all of the fighters are annihilated and the universe engulfed in light. Shulk turns back attempting to warn everyone, but before he can tell the other fighters what he foresaw, his vision comes true when Galeem unleashes a shower of light that vaporizes Shulk off-screen and imprisons him with the rest of the fighters except for Kirby.

In the mode proper, he can be found right over a cliff that leads to a waterfall. The area Shulk can be found at is rocky and grassy with many water features, reminiscent to the appearance of Gaur Plain. The Camilla spirit must be defeated right before he can be challenged. 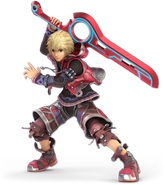 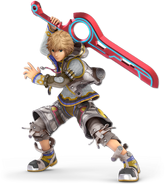 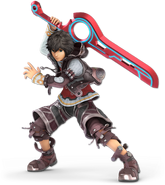 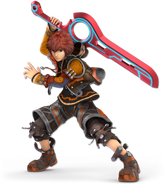 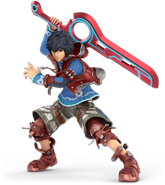 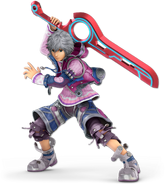 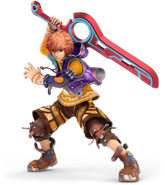 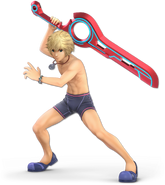