The Shield Breaker (シールドブレイカー) is Marth and Lucina's Neutral Special Move. It consists of a overhead slash (Melee) or forward thrust (Brawl, Smash 4, Ultimate) that deals high shield damage capable of breaking them, hence the name.

In Super Smash Bros. Melee, Shield Breaker is an overhead slash, being useful for edgeguarding and extending Marth's aerial combos. Shield Breaker can be perfected shielded however, with no penalties toward the receiver.

In Super Smash Bros. Brawl, the move has had a change in animation. Instead of an overhead vertical slash with a large arc area, it has become a single powerful stab. The damage of the attack is the same, but it is much more easily sweetspotted because of the new animation. It is also much faster, and now has higher knockback when not sweetspotted (which is slightly weaker and does 18% instead of the tipped 23%). A downside is that it is harder to hit people with.

A fully charged Shield Breaker used in the air can be used to aid recovery if it is performed when Marth is knocked in the very top left or right position of the screen/stage as makes him move forward quite a bit. When used not fully charged, it also moves him forward, but much less. After performing Shield Breaker, Marth can still use Dolphin Slash to further aid his recovery.

In Super Smash Bros. for Nintendo 3DS and Wii U, Shield Breaker returns with the same animation than in Brawl. Marth now shares this move with Lucina, who also stabs forward. Her animation for the charge up, however, is slightly different, brining up her blade to in front of her upper body and thrusting forward in a similar way to Marth's. Lucina's Shield Breaker also is more balanced damage-wise.

In Super Smash Bros. Ultimate, the charging animation of Shield Breaker is altered so that only Falchion/Parallel Falchion glows purple while charging as opposed to Marth/Lucina's entire body. The move also possesses the ability to be angled upwards or downwards, making it effective at shield poking or connecting to opponents close to the ground. In addition, Shield Break deals more damage if it makes contact with an opponent's head, though this bonus does not apply to Kirby, Meta Knight, Jigglypuff, or Pac-Man. Special Zoom will be triggered upon breaking the opponent's shield. 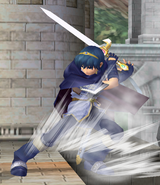 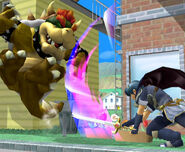 Marth's Shield Breaker. It has been strengthened to be able to break a shield while a character is holding it.

The hitbox of Marth's shield breaker in SSBM

Storm Thrust is the same as the default, however, when Marth or Lucina thrust their sword, a gust of wind is generated, and it will knock opponents back.

This move has some good defensive uses but very poor offensive uses. It doesn't deal much damage at all, though Marth can deal a little extra with the tip of his sword. The move can push away incoming enemies as well as functioning as an edge-guarding tool by blowing opponents away from the edge.

Dashing Assault consists in Marth or Lucina dashing forward while they thrust their sword, this moves has minor damage.

This move, unlike Storm Thrust, is better offensively. Marth and Lucina can start charging the attack from a greater distance from the opponent than they could Shield Breaker since the attack will move forwards a great distance. The move is also useful as a horizontal recovery in the air. It won't do much damage to shields and won't hurt opponents as much as Shield Breaker though.

This move is based on the Rapier, Marth's unique weapon in the Fire Emblem series. The Rapier has the ability to deal more damage on armored foes who usually take little damage due to a high class-granted Defense stat. In Melee, Marth performed this move as an overhead downward slash, but in Brawl, it was changed to a forward thrust to make it more similar to Marth's standard attacks in the Fire Emblem series.