Smashpedia
Register
Don't have an account?
Sign In
Advertisement
in: Characters (SSBWU/3DS), Amiibo, The Legend of Zelda universe,
and 10 more

Sheik (Super Smash Bros. for Nintendo 3DS and Wii U)

This article is about Shiek's appearance in Super Smash Bros. for Nintendo 3DS and Wii U. For other uses, see Sheik.

She currently ranks 4th place on the tier list due to being incredibly fast with a low-lag neutral with many moves allowing her to set up combos, where she excels. However, she is very lightweight and most of her attacks lack range.

Sheik is a Zone-Breaker, capable of penetrating the enemy's defense with her high mobility, boasting from having one of the best frame datas in the game which makes her a powerful Rushdown character. Her speed is one of the highest in the game, with fast movement and attack speed, which allows her to also employ many hit and run tactics.

Sheik's is notable for being unpredictable, with nearly all of her moves being able to combo with each other and having a huge variety of combos. Her most and unrivaled strength is the lack of ending lag for most of her moves, meaning she can string them together without problems, trapping the opponent into a flurry of kicks and punches. All her combos are very versatile, with quick attacks that can easily go from ground to air and vice-versa. Neutral Attack can be cancelled into grabs and tilts, while Forward and Up Tilts can easily start juggling setups. When her opponent is in the air, Sheik can put some serious pressure, chaining multiple Forward Aerials in succession. Her Neutral and Back Aerials have high active frames, allowing to hit opponents with late frames, that can lead to more combos. Up Aerial is one of the best juggling moves in the game, while her Down Aerial can even land some surprise Meteor Smashes. All her Throws can lead into other moves due the low knockback. Because of her combo potential, any hit move is a win; regardless of sweetspot or sourspot, the low knockback will always mean another option to be followed and frame trap the opponent.

As for her Special Attacks, she can put a lot of pressure and penetrate the enemy's defenses. Needle Storm deals a lot of hitstun when fully charged, being very fast, hard to spot due being very small, and also having transcending priority (meaning it can't "clash" with other moves). Burst Grenade can lead to some traps as Sheik can control the fuse of the bombs, being a decent option for edge guard. Vanish is a great offensive and defensive tool, allowing Sheik to deal damage and even KO opponents while recovering. Finally, Bouncing Fish is a versatile move that can be used to finish combos.

Despite her formidable frame data, Sheik has some notable flaws. Her reliance on combos hinders her damage output for individual moves, meaning she often requires to string very long combos to do sustained damage, while other characters can easily do the same amount of damage and even more with few blows. This is even more evident due the Stale-Move Negation mechanic, which means that Sheik loses a lot of damage potential as many of her combos consists on linking the same move (like Forward Aerial chains). She also has some problems with KOs, with her most powerful moves in terms of knockback being relatively hard to land, requiring specific sweetspots, such as her Up Smash. Despite being very fast, all her Smash Attacks lack range and have considerable ending lags, with her Down Smash being nearly useless with little KO power, while her Forward Smash being very slow and easy to punish. Her Burst Grenade and Vanish are also easy to punish if the player is not careful as they have considerable ending lags.

Overall, Sheik is often considered the best character in the game, with a great representation on tournaments due her performance against most of the cast. Players, however, must be creative with the combos in order to prevent too much staleness. Because of her lack of KO power, Sheik has a very high technical learning curve, requiring precision and accuracy to land her Aerial Attacks and Tilts properly, as well quick reflexes to strike with the finishing moves efficiently.

Sheik has received major buffs to further increase her mobility and power. Many of her moves properties now resembles a bit the ones she had in Melee, with many attacks being changed or reverted, giving back many of the options she lost in Brawl. As transformations have been removed, she no longer can transform into Zelda and vice-versa, but gained a new Special Attack that greatly aids her combo game. She also received very few nerfs, mostly notably to her recovery, with the lost of her tether recovery and being able to transform into Zelda. Her KO power was also drastically reduced for many moves in favor for higher focus on combo'ing.

Because of her dominance in the metagame and being regarded by many as the best character in the game, Sheik was also target of nerfs in several patches. However, much like Diddy Kong, who suffered the same treatment, none of these nerfs have significantly affected her viability in tournaments.

Appearance-wise, Sheik looks much like she did in Brawl, with a Twilight Princess inspired design. However, she has some additional details on her clothes, as well more defined muscular build that resembles her original design from Ocarina of Time. She also got a new standing idle animation that gives her a more "fierce look", as well two new idle poses. Most of her animations have been slightly tweaked to give her a more nimble and graceful manner.

In The Legend of Zelda: Ocarina of Time, Sheik claimed to be a surviving Sheikah. However, this was just a cunning disguise used by--SPOILER ALERT!--Princess Zelda so she could hide from Ganondorf. In Smash Bros., she's the complete opposite of Zelda, striking with fast attacks that can unbalance her foes.

Sheik's Burst Grenade side special throws a small grenade that draws in nearby fighters before exploding. Once the button has been released, it'll hop or explode after a time. The down special Bouncing Fish is an attack where Sheik strikes with both heels, falling similarly to the way a fish might flop around. 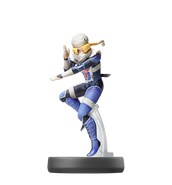